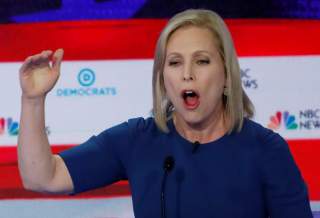 “Saving our planet should be this generation’s moonshot,” the New York senator said in her plan, which included a lot of “I will” but not a lot of “how.”

If she secures the presidency, Gillibrand said she would:

Gillibrand’s plan also focused on the U.S.’s economic competition with China, the country responsible for the most CO2 emissions compared to the rest of the world. She compared her plan to the original moonshot and challenged China to “a 21st-century clean energy ‘space race,’ where we decarbonize our economies through innovation and investment at a scale that rises to meet the global challenge we face.”

At the same time, Gillibrand said she would make sure clean tech is made by Americans and “not by China or another competitor” with a cross-government initiative requiring products like solar cells to be made in the U.S.

Gillibrand touted her support for the Green New Deal in her plan, even though one of its architects admitted it was designed not to fight climate change, but to fundamentally change the U.S. economy. The New York Democrat described the deal as “an ambitious framework to save our planet by investing in infrastructure, creating a green jobs economy, and protecting clean air and water” in her plan.

Gillibrand currently polls at 0.4 percent according to the RealClear Politics poll average.