Is Greenland the Next Battleground for America's History of "Island Imperialism"? 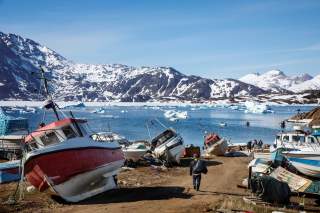 One of the most unexpected turns of Donald Trump’s presidency came this week, when revelations spilled out about the president’s serious consideration of the purchase Greenland from Denmark. According to the Washington Post, senior administration officials mulled possibly offering some $600 million in annual subsidies to the Danish territory, alongside a “large one-time payment” to Denmark for the transfer. Trump even joked about trying to swap Greenland for Puerto Rico, the latter of which remains an American territory.

The idea, at least as of right now, remains a farce, and isn’t yet a tragedy. However, there’s a clear historic legacy Trump’s tapped into — one that reaches directly into America’s Gilded Age of imperialism, buttressed by clear strains of white supremacy and neo-colonialism.

Greenland, after all, would be far from the first island acquisition Washington lawmakers have pursued. During the 1850s, the U.S. began its run of island-based imperialism through a series of annexations of so-called Guano Islands, a series of Caribbean and Pacific outposts Washington could use to harvest guano — bird droppings — as fertilizer.

Over the years, the portfolio of islands continued to accrue. An 1899 agreement with Germany brought the American Samoa island chain to the U.S. The Spanish-American War landed the U.S. Puerto Rico, the Philippines, and Guam. And while American attempts — stemming especially those based out of the slave-holding South — to annex Cuba eventually faltered, the U.S. managed to further cement its Caribbean holdings with the purchase of the U.S. Virgin Islands in 1917.

None of these holdings, of course, came with the consent of the governed. Rather, they were the fruits of agreements between Washington and Madrid, or Washington and Berlin, or Washington and Copenhagen. And that lack of consent from local populations immediately — and sometimes violently — manifested itself. The American acquisition of the Philippines, for instance, rapidly morphed into the so-called Philippine Insurrection — a Filipino war for independence, in essence. As the “most careful study” of the American-Filipino War found, “about 775,000 Filipinos died because of the war,” with Americans torturing, and setting up concentration camps for, Filipinos along the way.

Not that there would have been much reason to consent to American annexation at the time, after all. Puerto Ricans had to wait nearly twenty years to obtain formal American citizenship, while those in Guam — annexed to the U.S. only when Americans explained to their Spanish counterparts on the island that Washington and Madrid were, in fact, at war — had to wait over a half-century for American citizenship to finally come to them. And American Samoans are still waiting.

There’s no indication Greenlanders would be any different. With the island moving toward ever-greater autonomy from Denmark, the likely next step for Greenland would be outright independence, rather than American territorial status. As Paul Musgrave recently wrote in Foreign Policy, “Right now, there’s reason to think that Greenland may well be on a path to full independence, not simply switching one protectorate for another.” And as others have pointed, the move to sell the territory to Washington would be akin to the U.S. auctioning off, say, Texas or Arizona to the highest bidder — without residents’ consent.

None of these incidents of island imperialism, though, are comparable to the egregious conquest the U.S. brought about in its best-known island annexation to date: Hawaii.

By the early 19th century, the Hawaiian kingdom was already warding off multiple Western colonizing powers, all eager to access the islands. The appeal was easy to see: Not only did Hawaii’s position in the central Pacific present an ideal location for everything from whaling ships to coaling stations, but its climate proved fruitful for a sugar industry that, in time, blossomed into one of the world’s greatest. As such, French, German, British, and Russian diplomats eyed the islands as a potential jewel in a Pacific crown.

All of these countries, it’s worth noting, recognized Hawaii as a sovereign, independent nation — as did the U.S. Lorenz Gonschor, who received his doctorate at the University of Hawaii, told ThinkProgress that dozens of countries carried on diplomatic relations with Hawaii, far outpacing other nominally independent North American regions like Texas.

Still, those diplomatic relations did little to stop the U.S. from pursuing annexation — regardless of how native Hawaiians felt. By 1887, American missionaries and businessmen had accrued sufficient power that, backed by an armed militia, they managed to force the Hawaiian monarch to rewrite the country’s constitution. The so-called “Bayonet Constitution” earned its name from the fact that the Hawaiian monarch was forced, as National Geographic wrote, to consent to the new constitution “at gunpoint.” It was, added historian Steven Hahn, a “successful coup” — one that was finalized with the “goal of annexation” in mind.

A few years later, the process continued. As the University of Hawaii’s Davianna McGregor wrote, American minister John Stevens conspired in 1893 “with a small group of non-Hawaiian residents of [Hawaii], including citizens of the United States, to overthrow the indigenous and lawful government of Hawaii.” Stevens and a U.S. naval representative sent over 160 “armed naval forces of the United States to invade the sovereign Hawaiian nation,” with the U.S. then proceeding to recognize the conspirators as Hawaii’s lawful government. The new government ignored U.S. President Grover Cleveland’s request to restore Hawaii’s monarch, Queen Liliʻuokalani, to the throne. Instead, they forced her to “sign a statement of abdication” — a statement she later renounced.

But by then, the momentum toward American annexation was impossible to slow. In Washington, annexation fever — buoyed by outright white supremacy — gripped the capital. As Teddy Roosevelt thundered, “We ought to take Hawaii, in the interests of the White race.”

In 1898, the Americans formalized their annexation of the islands, holding a formal transfer ceremony in Hawaii itself. But even that event came with clear opposition from the native population; as one observer said, the band of native Hawaiians slated to perform at the event “threw away their instruments and fled around the corner out of sight and hearing… Some wept audibly and were not ashamed.”

All told, added Siler, “1.8 million acres of land now worth billions of dollars was seized from native Hawaiians and claimed by American businessmen… Hawaiians lost their country, the first sovereign nation to become a casualty of America’s imperial outreach.” The rank imperialism behind the annexation, though, was too much for some even in Washington to stomach. As Cleveland would write, “Hawaii is ours… as I contemplate the means used to complete the outrage, I am ashamed of the whole affair.”

Back in Hawaii, the outrage was just as tangible. Yet again — in a nod to Trump’s musings about purchasing Greenland without any consent of Greenlanders — America had annexed a series of islands without bothering to ask the inhabitants for their thoughts.

Might, to Washington at least, made right. As the deposed Hawaiian queen would write, “Time may wear off the feeling of injury by and by — but my dear flag — the Hawaiian flag — that a strange flag should wave over it. May heaven look down on these [Americans responsible] and punish them for their deeds.”

This article originally appeared on ThinkProgress on August 23, 2019.

Casey Michel is an investigative reporter for ThinkProgress.