Guess Who Just Caught a B-2 Bomber in Flight: Google Earth 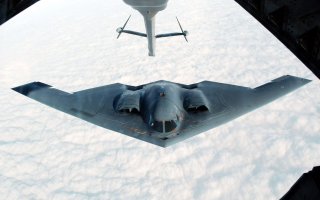 There are only twenty operational Northrop B-2 Spirit stealth bombers in service today, which means the chance for most people to see one in flight is slim.

So the odds that one would show up on a Google Earth satellite image must be considered astronomical. Still, it happened. Someone who goes under the name of “Hippowned” shared an image of the $2 billion aircraft over a farmer's field in Davis, Missouri, on Monday. The aircraft was reported to be about twenty miles south of Whiteman when the image was taken.

Hippowned posted that the B-2 Spirit's coordinates could be viewed on Google Earth at 39 01 18.5N 93 35 40.5W. The Reddit post has since racked up 109,000 upvotes and garnered 3,000 comments, while a short video zooming in on the stealth bomber over the Missouri countryside was posted to the YouTube My Garden Channel.

The Spirit remains the only aircraft that can carry large air-to-surface standoff weapons in a stealth configuration. The heavy strategic bomber was developed during the Carter administration in the 1970s. But it wasn't publicly displayed until November 22, 1988.

Military officials initially intended to build 132 Spirits. That number was later reduced to seventy-five.  The end of the Cold War eliminated the nuclear mission. So, under budgetary pressure as well as congressional opposition, President George H. W. Bush announced in 1992 that B-2 production would be limited to just twenty aircraft

“During its legendary combat debut in Operation Allied Force, the stealth bomber flew less than 1 percent of the total missions, yet destroyed 33 percent of the targets in the first eight weeks of the conflict,” according to Northrop Grumman’s website. “The B-2 also set a record with a 44-hour air combat mission in 2001. Its ability to penetrate enemy territory undetected is why it’s been called to duty in the opening phases of several conflicts including Operation Enduring Freedom, Operation Iraqi Freedom, Operation Odyssey Dawn and Operation Odyssey Lightning.”

A prototype test model was later converted to operation status–but in 2008 one of the existing production aircraft crashed during takeoff. As a result, there are now twenty operational B-2 Spirits.

None of the spirits have been retired from the Air Force to be put on display, but they have made periodic appearances as ground displays at various air shows. A Spirit test article, the second of two built without engines or instruments, is now on display at the National Museum of the U.S. Air Force in Dayton, Ohio. Until the Spirit is retired when the B-21 Raider enters service, the static display might be as close as most people get to seeing a Spirit up close. Of course, there is also hope another will show up on Google Earth.