This Gun Can Do the Impossible: Shoot 'Around the Corner' 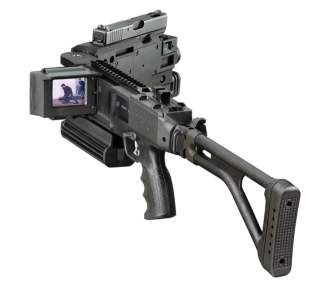 The Corner Shot chassis essentially turns the pistol into a shoulder-fired carbine, with a twist: at the press of a button, Corner Shot can instantaneously tilt left for right, allowing the shooter to remain behind cover while observing the camera feed.

The nature of urban combat, with its brutal, short-range fighting, has long resulted in combatants wishing for the ability to shoot around corners without exposing themselves to enemy fire. The Corner Shot firearm accessory does exactly that, allowing the user to see—and shoot—from behind cover. The accessory is just one of many new technologies designed to benefit ground troops and give them an advantage against dug-in adversaries.

One of the earliest examples of this sort of technology was the Krummlauf. Developed by Germany during the latter half of World War II after years of bitter house-to-house fighting, the Krummlauf was attached to the StG-44 assault rifle. Krummlauf consisted of a curved barrel extension and periscope, allowing a soldier to see in the direction the Krummlauf was firing. Germany hoped it would give its soldiers an edge in urban combat, and allow armored vehicle crews to shoot enemy soldiers without exposing themselves to enemy fire.

The Krummlauf was a failure, in part because the barrel quickly wore out, but more fundamentally because it was unrealistic to expect that such a minor gimmick—even a hundred of them—could help turn the tide of the war in favor of Germany. Although the United States and Soviet Union scooped up a variety of German “wonder weapons” after the war, the Krummlauf wasn’t one of them, and the concept went away for the next fifty years.

Ironically, the next iteration of the cover-shooting concept came from Israel. In the early 2000s, Israeli counter-terrorist unit commander Lieutenant Colonel Amos Golan introduced his invention the Corner Shot. Corner Shot was designed to do much the same thing as the Krummlauf, allowing troops (and SWAT teams) to engage targets from behind cover, but with several marked differences.

Corner Shot differs from its wartime predecessor in several ways. Unlike the Krummlauf, Corner Shot doesn’t try to turn the bullet—as difficult as that sounds—but instead turns the entire weapon. Corner Shot is essentially a hinged chassis, into which a pistol such as a Glock, Beretta 92, or other handgun is installed. A video camera is boresighted to the pistol, providing a live feed to the shooter, and a built-in tactical light provides illumination in dark spaces. There is a separate provision for installing a visible aiming laser.

The Corner Shot chassis essentially turns the pistol into a shoulder-fired carbine, with a twist: at the press of a button, Corner Shot can instantaneously tilt left for right, allowing the shooter to remain behind cover while observing the camera feed. A trigger extension runs from the handgun itself to a separate chassis trigger, and pulling the trigger on the Corner Shot fires the handgun. A separate trigger locks the firing mechanism, and the installed pistol can still use its own separate trigger. Another press of the button instantaneously locks the pistol into the forward-firing position.

Corner Shot has many of the same applications as the Krummlauf, including use by vehicle crews against enemy troops outside the vehicle they are riding in. The inventors particularly envisioned a use for it in counter-terrorist and urban warfare situations, where SWAT teams and infantry might need to look into—and engage targets inside—a room or other enclosed space without exposing themselves to enemy fire. Unlike its predecessor, Corner Shot is only supposed to be one of many tactical advantages that a ground force has going into battle, not a gimmick borne of desperation. Although highly specialized, it can be reconfigured as a conventional, forward-firing weapon in the blink of an eye.

Corner Shot is a great example of moving past a failed answer to a problem and tackling it in a new and unique way. The system has reportedly already been used in counter-terror operations of the post-9/11 era, and the growing urbanization of modern warfare will probably ensure that it, or something like it, will continue to serve ground forces worldwide for decades to come.