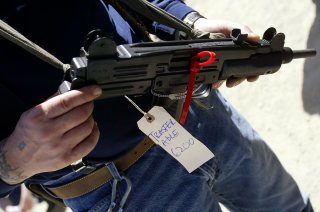 A common argument from opponents of the Second Amendment is that it was written at a time when firearms were slow to reload and thus weren't capable of being used in mass shootings. Gun control advocates argue that today's modern semi-automatic weapons should therefore not be protected by the Second Amendment.

On Wednesday, Jennifer Tucker, associate professor of history at Wesleyan University and vice president of the Association of Firearms History & Museums in an op-ed for CNN suggested the Supreme Court of the United States (SCOTUS) should address what she claimed is an unanswered question in the Second Amendment debate: "Are there any limits to the type of firearm that can be carried outside of the home?"

Tucker went on to explain the lethality of modern firearms and added that "If the Constitution had been written in the 1880s instead of the 1780s, the Framers would have been much more aware of the pace of innovation. The Founders lived in an era when they could be forgiven for thinking that 'a gun is a gun is a gun.'"

However, this argument disregards the fact that there were rapid-fire weapons available at the time the Second Amendment was drafted. As has been previously reported, among those firearms was the Kalthoff Repeater, which was in fact developed in the seventeenth century, so more than one hundred years before the drafting of the Second Amendment. While it was a complex weapon that only a specialized gunsmith could repair, it was capable of holding upwards of thirty rounds that could be fired in quick succession.

There was also the Belton flintlock, which was among the earliest true repeating muskets. It could fire up to sixteen consecutive shots in as little as twenty seconds. What is especially noteworthy about Joseph Belton's design is that he actually offered it to the Continental Congress, which certainly meant that those Founding Fathers at least understood the concept of rapid-fire weapons!

Likewise, it should be noted again that civilian firearms often surpassed those in quality, accuracy, and range of the weapons used by the military. That certainly isn't true today and hasn't been the case since the passage of the National Firearms Act of 1934 (NFA). Until that point, the average civilian could buy a Thompson submachine or Browning Automatic Rifle.

Moreover, many Americans may readily accept President Joe Biden's suggestion that citizens couldn't buy cannons when the Second Amendment was drafted. In fact, throughout much of the country's history, cannons were available for private purchase—and that only changed with the NFA.

Finally, as has also been noted—there is great danger in trying to rewrite the Second Amendment to take into consideration our modern firearms. In doing so it would be too easy for the government to decide that the First Amendment's right to a free press literally refers to only the printed word, and not radio, TV or the Internet.

Yes, firearms technology may have advanced but that doesn't mean we should rewrite the Second Amendment, just as much as we should expect that today's modern media is protected by the First Amendment.