Gun Control Would Not Have Stopped Texas Synagogue Hostage Taker 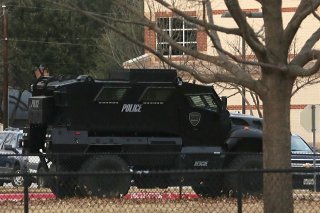 How did Malik Faisal Akram, the British national who held four hostages at a north Texas synagogue last Saturday, acquire his gun? That question is being asked repeatedly, including by Akram's brother.

"He's known to police. Got a criminal record. How was he allowed to get a visa and acquire a gun?" Gulbar Akram said in a statement, according to the British-based Sky News.

"Texans with known histories of violence can easily acquire weapons, including assault weapons, without a background check or sale record, no questions asked," Ari Freilich, the state policy director at Giffords, a national gun control group, also said in a statement, reported by the Texas Tribune. "This is obviously a particularly attractive source of weapons for people who know they would not pass a background check."

However, President Joe Biden, who spoke on Saturday after the hostage situation had been resolved, said Akram’s gun was illegally purchased.

"Allegedly, [Akram] purchased…[the weapons] on the street," Biden said. "Now what that means, I don't know. Whether he purchased it from an individual in a homeless shelter or a homeless community, or whether — because that's where he said he was — it's hard to tell.  I just don't know."

Gun control advocates have suggested that background checks could stop incidents like this, but in fact, this should be an example of where gun background checks make no difference. Akram didn't attempt to legally purchase the firearm, because he couldn't do so.

Yet Biden still advocated for gun control even as he admitted that stricter laws might have made little difference.

"The idea of background checks are critical, but you can't stop something like this if someone is on the street buying something from somebody else on the street. Except that there's too — there's so many guns that have been sold of late; it's just ridiculous," Biden said. "And it's because of the failure of us to focus as hard as we should and as consistent as we should on gun purchases, gun sales, ghost guns, and a whole range of things that I'm trying to do."

Biden also seemed to use the standoff to call out the fact that many Americans legally exercised their Second Amendment rights, in stating that there were "so many guns that have been sold," likely referring to the 38.8 million National Instant Criminal Background Check System (NICS) checks in 2021. Akram didn't buy a gun through the system, which is in place to keep guns out of the hands of criminals or terrorists, yet he still acquired a weapon.