This Gun Is Making a Comeback: Walther PPK Is One Again in Production 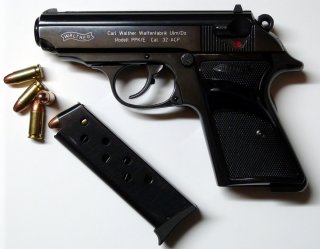 One of the most iconic European handguns of the twentieth century is back in production. Originally a police gun and later made famous by spy films, the Walther PPK is being produced in both Germany and Arkansas for sale in the United States. Nearly one hundred years old, the PPK’s appeal lies in its reputation as a reliable, discrete handgun for plainclothes police and modern carry use.

In 1929 the German small arms maker Carl Walther Waffenfabrik AG of Ulm, Germany invented a pistol that proved a quantum leap over anything then currently in production. The Walther Polizei-Pistole, or PP, was the first double-action semi-automatic pistol. Unlike other semi-automatic handguns of the time, which were generally blocky or chunky looking, the PP was sleek and exhibited clean lines. The PP was meant as a pistol for plainclothes policemen and the design allowed the weapon to be drawn quickly from under clothing.

The PP was a double action blowback pistol, but that was only the start. The pistol had an external hammer, allowing for single action operation. It had a loaded chamber indicator in the form of a signal pin that protruded when pressed against a loaded round. This allowed users to tell, at a glance, if the gun was ready to fire. The manual safety lever, once flipped, moved the firing position into a safe position and lowered the hammer.

The PP was a 7.65-millimeter semi-automatic blowback handgun. It had an overall length of 6.8 inches, a barrel length of 3.35 inches, and an overall weight of 1.5 pounds. It had an eight round magazine, used blade sights, and had a muzzle velocity of 948 feet per second. The Walther PP may have been the first handguns made with lightweight alloy, not steel receivers, resulting in a significant weight reduction.

The original Walther PP was chambered in 7.65 Browning, but over the years it was ported to several other light and medium calibers. In the early 1930s, the PP was chambered in 9-millimeter Parabellum for possible use by military police. It has also been offered in .22 Long Rifle, 6.35-millimeter ACP, and 9-millimeter Short (.380 ACP). The PP was manufactured under license or copied in Turkey as the Kirikkale and in Hungary as the FEG M48. It was manufactured in France by Manhurin until 1954 when Walther re-entered the small arms industry. It was even manufactured in East Germany, where it was known as the P1001. As the main Walther facility was in Ulm, West Germany, the P1001 was reportedly developed from scratch by Ernst Thälmann Werke Suhl and manufactured briefly between 1953 and 1964.

The Walther Pistole, Polizei-Kriminale (PPK) followed the PP and is the pistol still manufactured today. The PPK has a handful of differences that distinguish it from its ancestor, including a shorter, 3.15inch barrel, a shorter overall length of 5.83 inches, and a lighter weight of 1 pound, 5 ounces. Aside from dimensional differences, the physical between the two handguns is the design and construction of the butt grip, which is simplified in the PPK. The PPK was also manufactured in 7.65 Browning, .22 Long Rifle, 6.35-millimeter ACP, and 9-millimeter Short, although 7.65 was by far the most common caliber.

During World War II the German Army officially used the new Walther P-38, though the conquest of many European armies and the absorption of their national armories meant that in reality the German Army and Waffen SS used a hodgepodge of semi-automatic handguns. The PPK was one of many of those handguns. The P38 copied its use of a double action operating system, and the starting in 1957 the P38 was purchased in large numbers by the postwar West German armed forces, border guards and police as the Pistole 1, or P1.

One factor that contributed to the pistol’s celebrity status was its popularity in espionage films, particularly the James Bond series. The Walther PPK became M.I. 6 agent James Bond’s weapon of choice, serving in films from From Russia with Love to A View to a Kill. Compact, elegant and dangerous, the PPK was the perfect spy pistol for the big screen.

Walther developed the PPKS in the late 1960s to comply with the U.S. Gun Control Act of 1968. From the 1980s to 2002 the PPKS was made by Interarms, but from 2002 to the early 2010s they were made by Smith and Wesson. The new PPK/S is made by Walther in both the U.S. and Germany, with the slides manufactured in Ulm, the historical home of the PPK. The rest of the handgun made in the United States. The new German-American PPKS will be offered in both stainless steel and black.

The return of the PPK to market is an acknowledgement of the PPK’s popularity as a historical firearm, discrete carry pistol, and pop culture piece. In that sense, it has a cachet that few other handguns can hope to achieve. It is a handsome, practical, and reliable pistol that will continue production well into the twenty-first century.