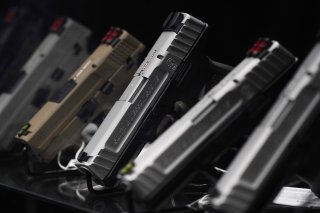 January saw a steep decline in firearms sales from the same time one year ago. While Americans purchased almost 1.3 million guns in January 2022, that was down 42.6 percent from 2.2 million sold in January 2021 according to data from Small Arms Analytics & Forecasting (SAAF), a firearms industry analyst firm.

The decline reportedly impacted the handgun and long gun segments of the market in equal measure.

The research firm based its unit sales estimates on data taken from the FBI's National Instant Criminal Background Check System (NICS), adjusted for checks unlikely to be related to end-user firearms sales, as well as from retailer reports and other information. As a result, SAAF adjusted NICS numbers may underestimate the actual unit sales by some amount. However, based on background checks as a benchmark, it seems the gun market has cooled off from its record sales levels of late 2020 and early 2021.

Gun sales have still remained above pre-pandemic levels, though. Just under 1.3 million firearms were sold in January 2020, and just over a million were sold January 2019.

"The estimated U.S. firearms unit sales for January 2022 nearly equal those of January 2020, pre-COVID-19-pandemic," said SAAF Chief Economist Jurgen Brauer. "These, in turn, however, were 19 percent above the January 2019 level so that the industry still experienced strong January 2022 sales. Nonetheless, the drop relative to January 2021 is certainly large, but not unprecedented, in size."

The one-month drop from December's 1.9 million is notable, but also not unexpected as the final days of December include holiday sales. Gun sales may be slowing, but are still outpacing pre-pandemic levels.

SAAF's findings were in line with that of the National Shooting Sports Foundation (NSSF), the firearms industry's trade association, which estimated that slightly fewer than 1.2 million firearms were sold in January.

According to SAAF estimates, a total of 19.9 million firearms were sold in 2021. That may have fallen short of the record of 22.8 million firearms sold in 2020, but remained the second highest year overall for gun sales.  Sales in 2019 still greatly outpaced 2016, which had an estimated 16.7 million guns sold.

Another notable takeaway from 2021 is that about 5.4 million firearms were sold to first-time buyers, the NSSF's data found. New gun owners made up nearly 30 percent of the total 2021 market – highlighting that more Americans are buying guns.

Gun owners are increasingly diverse as more Black, Latino and Asian Americans as well as women are embracing their Second Amendment rights. All of this came even as President Joe Biden has continued to call for new gun control measures.