Guns On The Go: These Are 2019's Most Portable And Deadly Weapons 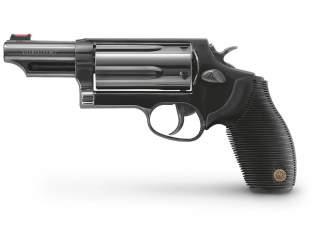 Key point: Some firearms are designed for portability, or to combine two different functions within the same compact platform.

Firearms have a well-deserved reputation for appearing large and bulky. Long, thick barrels, heavy-duty receivers and banana-shaped external magazines often make firearms look burdensome to carry on a long trip, particularly by foot. Some firearms are designed for portability, or to combine two different functions within the same compact platform. The result are firearms that offer security and the ability to hunt or do a little plinking in the backcountry.

First introduced in 1964, the Ruger 10/22 rifle was already a handy little semiautomatic rifle. Designed to look similar to the wartime M-1 carbine, the 10/22 is a blowback-powered rifle that uses the recoil of a .22 long rifle gunshot to eject the spent cartridge and load a new one. The 10/22 is fed from a brick-shaped detachable rotary magazine that fits into the rifle just before the trigger guard. With a sixteen- to eighteen-inch cold-hammer-forged steel barrel, the 10/22 is a short, well-balanced weapon.

In 2012, Ruger introduced a takedown model of the 10/22. A quick twist separates the barrel from the rifle, allowing the rifle to be stored in two short pieces, and the rifle is reassembled just as quickly. The 10/22 maintains zero with attached optics when the barrel is reattached. The X-22 Backpacker stock designed by Magpul goes a step further, allowing firearm owners to store the detached barrel in the stock of the rifle.

The Pack-Rifle is one of the unusual firearms on the market. The rifle’s overall length is thirty-three inches, and it can be disassembled into two seventeen-inch pieces in just two seconds. Mountain View Arms stripped the Pack-Rifle of anything not completely necessary, like the trigger guard and a sight rail, and using aluminum instead of steel whenever possible. The button-rifled barrel is a chrome moly lined with a carbon fiber outer sleeve. The result is a rifle that weighs just under one pound, or 15.5 ounces.

One feature that make the Pack-Rifle even more versatile is that it also converts into a fishing pole. A seat for a fly-fishing reel is stored in the pistol grip, and a telescoping fishing rod extends from the shoulder stock. The result is a lightweight fly-fishing rod capable of catching fish in backcountry lakes and streams.

The Ruger LCR was introduced to the gun market in 2009 and designed as an ideal concealed-carry revolver. The LCR is extremely lightweight, weighing just 13.5 inches, with weight reduction achieved through the use of an aluminum and polymer frame coupled with a steel cylinder. The LCR is just six inches long, making it easy to conceal in a waistband, shoulder or ankle holster, and can even disappear into a jacket pocket. The LCR is 6.5 inches long with a 1.87-inch barrel, and to further keep weight and width down, has a five-round cylinder. The double-action system allows the user to advance the cylinder to a fresh round and cock the pistol with a single long pull of the trigger, allowing the LCR to do away with an external hammer.

The Taurus Judge is a dual-use revolver with applications for home defense and carrying in the outdoors. The revolver is quite heavy, and and at 36.8 ounces is heavier than many of its contemporaries. It does, however, combine two different shells and cartridges into a single platform. The Judge fires not only .45 Colt revolver cartridges but also .410 (three-inch) shotgun shells. The .45 Colt round is a reliable manstopper, with up to four hundred foot-pounds of energy at the muzzle. The .410 shot shells are useful against small, dangerous animals such as snakes and light game. Despite its weight the Judge is only 7.5 inches long with a three-inch barrel, making it fairly compact as far as dual-caliber weapons go. The revolver was named “The Judge” after Taurus discovered several judges in the Florida area were buying the handgun for their own personal protection.

The Cold War saw the long-range bombers of America’s Strategic Air Command on continuous worldwide alert, with thousands of aircrews prepared to execute war plans that would send them deep into enemy territory. The U.S. Air Force armed the aircrews with the ArmaLite AR-7 survival rifle. Developed by Eugene Stoner, the inventor of the AR-15/M-16 series rifles, the AR-7 was meant to keep downed aircrews alive in enemy territory, giving them a tool for hunting small game.

The AR-7 was designed for portability. At two pounds, eight ounces, the AR-7 was light enough to include in a pilot’s survival gear. The rifle disassembled into three parts: barrel, stock and receiver. The barrel, receiver and two eight-round magazines all fit into the rifle stock through a compartment accessed in the butt plate. Even better, the butstock was designed to float in water. Although aircrews no longer carry the AR-7, the Henry Repeating Arms Company manufactures a version of the survival rifle, dubbed the “U.S. Survival Rifle”.