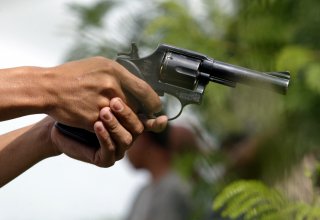 Last week, the firearms industry’s lobby group, the National Shooting Sports Foundation (NSSF) and a group of fourteen firearms manufacturers, distributors and retailers filed a federal lawsuit that challenges a New York statute that would provide the Empire State with the ability to sue gunsmiths and sellers over gun violence. The NSSF moved for a preliminary injunction to challenge the New York law as unconstitutional for casting blame on the industry for the criminal misuse or unlawful possession of firearms in New York, regardless of where those guns may have been purchased.

The gunsmiths and the NSSF argued that the New York “public nuisance” law would subject the members of the industry to civil lawsuits and would impose liability on industry members for firearms lawfully sold anywhere in the United States that end up being criminally misused or illegally possessed in New York.

“This law is not about making our communities safer but rather, as former Governor Andrew Cuomo once proclaimed, to impose on the firearm industry a ‘death by a thousand cuts,’” said Lawrence Keane, the NSSF senior vice president for Government and Public Affairs and general counsel.

“(The) lawsuit will end this unconstitutional attack on the businesses, large and small, vital to Americans' Second Amendment rights,” Keane added. “Opening up members of the firearm industry to a torrent of baseless civil lawsuits is—as it was in the past—an effort to impose radical gun control policies by litigating the forceful bankruptcy of companies.”

The lawsuit challenges the New York law, as preempted by the federal Protection of Lawful Commerce in Arms Act (PLCAA), and further challenges the law as unconstitutionally vague in the violation of the Due Process Clause of the United States Constitution.

According to the NSSF, the challenged law permits lawsuits by victims of criminal acts and citizens claiming they have been harmed by an alleged public nuisance in New York. It would allow for lawsuits by New York State as well as any local government, such as the City of New York. Both New York State and the City of New York were part of a wave of similar lawsuits filed over twenty years ago that led to Congress passing the bipartisan PLCAA in 2005.

New York Attorney General Letitia James, a Democrat who has frequently clashed with the firearms industry has previously sued to dissolve the National Rifle Association over allegations of financial fraud, said she’ll fight the lawsuit.

“Once again, the gun lobby is trying to exert total control over this country and thwart common-sense efforts to protect lives,” James told reporters in response to the lawsuit. “Make no mistake: We will aggressively defend this law and won’t back down against their continued attempts to endanger New Yorkers.”

President Joe Biden has also launched his own attack on the PLCAA and made the dubious claim last spring that the firearms industry was the only industry in the nation that was exempt from lawsuits.