A "Hamiltonian Moment" for European Defense? 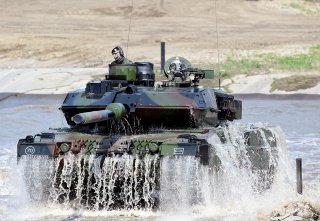 If the debate over European defense wasn’t already fraught, the coronavirus crisis—and the EU’s subsequent contracting economy—has put it at risk of becoming the virus’ next victim.

To cope with the economic consequences of the pandemic, many member states will be forced to reduce their defense spending. Bad memories of the consequences of the financial and debt crisis of 2009/2010 will be awakened: At that time, sixteen European NATO members were forced to reduce their defense spending by more than 10 percent. Even today, the armed forces of EU member states are underfinanced and severely restricted in their operational capabilities. It is therefore not surprising that member states are increasingly calling for EU funds. In their view, Europe will only achieve its goal of strategic autonomy if the defense sector is strengthened through EU programs, above all the European Defense Fund (EDF).

Although there is indeed a need for more defense spending, one cannot ignore the fact that more money only really helps if the member states hand over sovereignty to the EU level. What is desperately needed is a "Hamiltonian moment" for European defense. Just as in 1790 in the US a confederation with a weak central government was gradually transformed into a political federation, in 2020 in Europe the way should finally be paved for deeper political integration in the EU's Common Security and Defense Policy (CSDP).

Three Arguments on Both Sides of the Atlantic

First, coronavirus will impact international security and thus force the EU to reconsider its role as a security actor. In the EU’s neighborhood, only the conflict in Libya has worsened in recent weeks, where the civil war is escalating further. All other conflicts—Eastern-Ukraine, Syria, Mali, Yemen—are proceeding with almost the same intensity. In the long term, the recent fall in oil prices may make Russia, Saudi Arabia, and the United Arab Emirates consider whether or how long they are prepared to continue their military interventions in Syria, Libya, and Yemen. This could result in the warring parties being prepared to conclude peace agreements more quickly than before the pandemic.

Also, the impact of the pandemic on the increasingly pronounced conflict between Washington and Beijing has not yet been determined. A possible President Joseph Biden might be inclined to extend his hand more strongly towards the EU, the most important trading partner, from January 2021 and to revive transatlantic relations. There is no doubt that the EU member states will react differently to these developments. But only a coordinated and common response to the changes in international security post-coronavirus can ensure that EU funds actually improve member states’ defense capabilities.

Second, member states have to become serious about military engagements. In recent years, the EU launched many initiatives to strengthen military capabilities. However, significant progress in this area has not led to the launch of more ambitious military operations; on the contrary: in January 2020, seventeen missions were underway and some 5,000 people were deployed. Compared to 2015, this is roughly the same number of missions, but the number of deployed personnel has decreased from 6,000 in 2015. EU leaders must admit that the priority they have given to developing military capabilities has not strengthened the political will to develop the CSDP operationally.

Finally, financial instruments, such as the EDF, alone will not improve European defense capabilities. Through the EDF, the plan is for the EU Commission to make a financial contribution to projects in which several member states cooperate together in order to reduce the most serious capability gaps in drone technology, satellite communications and strategic air transport. Nevertheless, the prospect of money from Brussels has helped to put a host of 47 joint projects on the agenda over the past three years. These projects notified for co-financing by Brussels however are minor projects, which member states had often already pursued at national level. A will to strengthen the EU's defense capability (European added value) is hardly discernible in these projects. EU member states continue to pursue their national planning and procurement interests. This lack of cooperation generates avoidable annual costs estimated at around 21 billion euros.

For more money for security and defense policy to lead to a real improvement in defense capabilities, the EU member states would have to give the EU Commission a stronger role: They would have to allow the Commission to create a single European armaments market. However, they have contractually immunized their national arms markets against opening. The EDF is a clear indication that they are unwilling to change this. At the last EU summit the member states have significantly reduced their financial volume: of the €13 billion originally planned for the 2021 to 2027 period, only €7 billion have been left at the end of the negotiations on the EU budget.

This means that the EU Commission will no longer be able to use financial incentives to reduce the restraint and skepticism of the member states. By downgrading the EDF, the member states are making it clear that they are unwilling to take bold steps towards the Europeanisation of defense planning and procurement and that they do not want supra-nationalization of this policy area.

In the constitutional compromise forged by the first U.S. Secretary of the Treasury Alexander Hamilton in 1790, the parties agreed that the U.S. federal government would take over all the debts that the individual U.S. states had taken on during the Revolutionary War. In doing so, they paved the way for federalization in return and laid the foundation for a strong federal government in the United States. In the case of the CSDP, too, the distribution and use of funds should pave the way for deeper political integration.

A decade ago, the financial and debt crisis was not enough to trigger a real Europeanisation of this policy area in view of the economic advantages. The coronavirus crisis offers a second chance for this.

As long as the member states are not prepared to go down this road, a simple call for more money will not be sufficient.

Markus Kaim is Helmut Schmidt Fellow of the Zeit Foundation and the German Marshall Fund in Washington; Ronja Kempin is Senior Fellow in the Europe Research Division of the Stiftung Wissenschaft und Politik in Berlin.