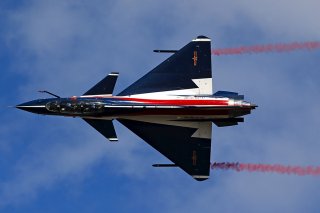 Even though the Western mainstream view is that China is a military and economic dynamo that is quickly leaving America behind, the world may be turning against the Middle Kingdom, and Chinese leadership may be turning to a harsh brand of nationalism as a result. Its recent border clash with India in the high Himalayas and crackdown on free Hong Kong are the most recent manifestations of this.

China's rise as a global economic power, and regional military power, is one of the fastest in history. China has grown faster than America for four straight decades. It has built the industrial and technological foundations for a rapid expansion of its military, to include world-class capabilities in space launch, and its own version of GPS. China's mercantilist economics have taken over entire sectors of other economies, including those of the United States. All this has occurred not just with U.S. acquiescence, but intentional facilitation. America first wanted China as a counterweight to Soviet Russia, and then aggressively helped China to get rich, with the expectation that self-government and democracy would follow in the Middle Kingdom.

But the times may be-a-changin’. China's population is aging at a rate and scale that is historically unprecedented. That nation is expected to lose 400 million working age persons this century, and the number is already falling. There is an 18 percent gender imbalance in the country's population. China's birth rate never recovered from its multi-decade "one child" policy. India will likely pass China as the world's most populous country this decade. China has just backed off publishing its economic growth goal for the first time in decades.

China is bullying South Korean and Japanese companies. Samsung and Sony are scaling back their operations in the People's Republic. Apple is a laggard, but is planning to move 20 percent of its Chinese supply-chain presence to India. India banned fifty-nine Chinese mobile apps after the above-mentioned border clash. Huawei has found itself on the Trump administration's blacklist, and its loss of Google on its smartphones has badly damaged sales outside China. The UK has announced plans for Huawei's complete removal from British telecom infrastructure by 2023.

China's export markets are flat on their backs, and furious at China about the coronavirus. Europe is 16 percent of China's exports, and is an economic and financial wreck. America is 19 percent, the Trump attitude towards China is no secret, and those views are gaining steam with both parties on Capitol Hill. Chinese exports to America are falling rapidly, down 17 percent from the summer 2018 to January 2020. This will be dramatically accelerated by coronavirus. No one thought this economic decoupling could happen so fast. Chinese global direct foreign investment is also down from $260 billion in 2017 to $125 billion in 2019. Why would China be easing up now on its Belt and Road Initiative?

On the military side, China's geographic circumstances can only be described as bottled up and vulnerable. China is almost surrounded by countries that are unfriendly. It only has one ally, North Korea, which is more of a client state. Japan, South Korea, Taiwan, Vietnam, Australia, and India are all on the spectrum from cool to hostile towards China. Most are allies or friendly with the United States. Many are armed with American high-tech weapons.

To actually control the South China Sea, China would need to control both Subic Bay and Cam Rahn Bay. China is zero percent of the way there. The Philippines just reversed course on its threat to abrogate their Visiting Forces Agreement with the United States. Every South China Sea nation's maritime territory is blatantly infringed upon by the PRC's "Nine Dash Line" claims. This is not how to make friends. The America-India courtship is going well.

China and Russia are temporary friends of convenience. Russia is strapped for cash, and the quality and quantity of its defense exports are mostly sub-par. The Chinese defense industry mainly builds Russian knock-offs. Russia is good at making fighters and air defense, but not much else. China's commercial aircraft are immature, and are not worthy of being considered for aerial refueling platforms. There is not much north or west of China, and it is not a good working alliance with Russia. Their power centers are a giant continent apart, and Russia's center of gravity has always been in Europe. Russia has never been able to project power effectively in her far east. This is not a good long-term symbiotic relationship.

In order to secure her trade, China must project power from the Yangtze basin and Yellow Sea into the East China Sea. Waiting there are three potential adversaries with sophisticated Western militaries: South Korea, Japan, and Taiwan. Four if you want to count the United States. South Korea and Japan have great force generation land-based aircraft in Strike Eagles (F-15s) and Joint Strike Fighters (F-35s). Taiwan is getting lethal F-16 Vipers with AESA radars. There are 28,000 American troops on South Korean soil.

China has no nuclear-powered aircraft carriers, and its conventional carriers are clunkers. Chinese land-based Flankers are much better than their carrier aircraft. The carrier-based J-15 Flanker, based on the Russian Su-33, is a bit of a joke. They cannot take off with full ordnance and fuel. Chinese press openly criticizes the J-15. They are 70,000-plus pound fighters taking off from a ski ramp with an obsolete carrier launch and retrieve system. The Chinese carriers are powered by old-fashioned oil-fired boilers.

Chinese bombers are based on old Soviet-designed Tu-16 Badgers. They are more accurately described as "medium" bombers, as opposed to their "strategic" long-range American counterparts. Though recent models feature upgrades, these H-6 bombers are not ready to go toe-to-toe with Western air defenses or air superiority fighters.

A move to serious American-type power projection would bankrupt a Chinese economy that is already in trouble. The scary power projection incentive or scenario for China is just not there. The eastern side of the first island chain is the wrong side for China. There China will find swarms of fourth and fifth generation land and sea-based fighters. Taiwan has an impressive military buildup underway. Taiwan has lots of airfields, rapid runway repair capabilities, and can maintain a high level of tactical operations even after a bombardment. Even the west side of the first island chain is a nasty problem set for China. Whether it is superior allied tactical aircraft or American attack submarines, it will have its hands full in a battle it might not win.

China needs markets in Europe, oil from the Persian Gulf, and resources in Africa. All three of those are easily held hostage by the U.S. Navy alone, not to mention the naval capabilities held by American friends and allies along the Asian littoral. The Chinese economy would collapse within weeks without Persian Gulf oil.

China's military challenges may not be surmountable, maybe for decades. Geography is just too hard for China.

Merrick "Mac" Carey is a former senior Capitol Hill aide who is now CEO of the Lexington Institute, a public policy think tank in Arlington, Virginia.