Has the United States Lost Confidence in General Milley? 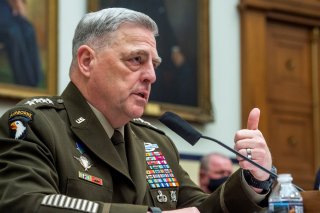 Bob Woodward and Robert Costa’s new book, Peril, discloses that General Mark Milley, the Chairman of the Joint Chiefs of Staff, attempted to insert himself into the nuclear weapons launching process and held phone calls with his counterparts in China’s People’s Liberation Army (PLA).

On the latest episode of Press the Button, Andrew Bacevich, President of the Quincy Institute for Responsible Statecraft, discusses why he believes Gen. Milley should be relieved of duty for undermining civil-military relations, and the dangers of the U.S. sole-authority policy regarding nuclear weapons.

After the attacks on Hiroshima and Nagasaki, President Harry Truman ordered a halt to further atomic bombing without his express permission. Since then, the president alone has had sole authority to launch nuclear weapons. As Bacevich notes this policy was designed “when a nuclear retaliatory capability or arguably a first strike really represented the centerpiece, or the ultimate expression, of our national security strategy.” As time went on, Bacevich explains, “the perception developed […] that it was crucially important for the United States to have the ability to launch a nuclear attack basically on a moment’s notice and therefore it seemed to make sense to put the authority to order such an attack in one individual.”

Despite its inherent dangers, Bacevich highlights that “proponents of that system or people who, at least thought it wasn’t really worth worrying about, did not anticipate the American people electing somebody like Donald Trump as commander in chief.” Regardless, the Chairman of the Joint Chiefs of Staff has no role in the nuclear chain of command. Indeed, since the Goldwater-Nichols reforms, the Joint Chiefs have no role in any chain of command—and by insinuating to Pentagon staff that he did have a role, Gen. Milley severely undermined the principle of civilian control of the military.

But this was not the first time sole authority has shown its flaws, however. As Bacevich explains, in the final days of the Richard Nixon administration, when the president was showing increasingly erratic behavior, “then-Secretary of Defense James Schlesinger contacted senior U.S. military commanders and basically said, ‘if the President calls you and gives you an order. Call me. Don’t obey it.’ In other words, a senior official was concerned about the man with his finger on the button acting recklessly.”

There is a solution to this problem: restrict the president’s unilateral ability to start a nuclear war. Bacevich suggests there should be, “collective decision making, that would include people beyond simply the president.” He believes this can be done without undermining the United States’ ability to respond to a nuclear attack, stating that the “president should have the authority to order some kind of retaliation so we’re not trying to create a situation where an adversary can attack us, and we all sit around and have a meeting and talk about it.”

While President Biden could issue an executive action to limit a president’s ability to launch nuclear weapons, Bacevich notes that his successor could rescind that order and reinstate sole authority. Therefore, he argues, “it’s incumbent upon the Congress to act.” And some members of Congress are doing just that. Senator Ed Markey (D-MA) and Representative Ted Lieu (D-CA-33) have introduced a bill that would prevent the president from using nuclear weapons in a first strike unless Congress declares war.

While it is part of Gen. Milley’s job to communicate with his counterparts in militaries across the world, according to Bacevich what Gen. Milley said to General Li of the PLA could be considered “treasonous” or at minimum, “further evidence of bad judgment.”

“The navy, I think, in particular, has this wonderful phrase that they use about losing confidence.” Bacevich concludes, “When the Navy loses confidence in a commander, the commander is removed. […] I think that the appropriate action here by Biden is to say, ‘I have lost confidence in General Milley and therefore I’m going to appoint someone else to become Chairman of the Joint Chiefs.’”

The entire interview with Andrew Bacevich is available here on Press the Button. His recent article on this topic can be found in the LA Times.

Chase A. Enright is the Development Coordinator with Ploughshares Fund, a global security foundation dedicated to the elimination of nuclear weapons.