Has the U.S. Army Created Its Ultimate Weapon? 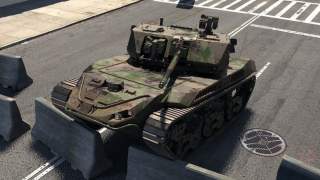 (Washington, D.C.) Armed Army robot vehicles conducted reconnaissance, called for indirect fire and then, when directed by human decision-makers, attacked and destroyed enemy targets in a recent experiment designed to assess the technical maturity and readiness of autonomous ground drones.

“We had four robot vehicles conduct a tactical mission while humans were safe in defilade. We built four robots that are refurbished M113 tracked vehicles and we’ve taken two Bradleys -- gutted them -- and turned them into two control vehicles with all kinds of sensors on them,” Jeff Langhout, Director, Ground Vehicle Systems Center, told reporters in October at the Association of the United States Army Annual Symposium, Washington, D.C.

Langhout explained that the robots engaged in “direct fire” missions when directed by human decision-makers, per existing doctrine requiring a human to be “in the loop” when it comes to using lethal force for attack.

It’s the cutting edge of manned-unmanned teaming, human-machine interface coordinating human decision-makers with robots increasingly able to perform autonomous functions. The Army doctrinal parameters are significant here, because the technological ability of a robot to surveil, track, target and destroy a target without human intervention -- is basically here. However, for ethical and tactical reasons, DoD maintains its clear position that humans must make decisions regarding the use of lethal force, despite advances in algorithms enabling greater autonomy. The doctrinal stance is also grounded in a recognition that even the most advanced computer algorithms are not sufficient to replace the problem-solving, decision-making abilities of human cognition. There is concern, however, that potential adversaries will not adhere to similar doctrine.

These questions figure prominently as the Army leverages the best available technology and makes rapid progress toward its ultimate goal of fielding a fleet of unmanned vehicles operating as “wing-men” for manned attack vehicles.

“I truly believe as we fight in the future robots are going to be involved,” Brig. Gen. Ross Coffman, Director Next Generation Ground Vehicle Cross Functional Team, told reporters.

All of this is part of the Army’s fast moving Robotic Combat Vehicle program, a key element of its Next-Generation Combat Vehicle (NGCV) program intended to provide the service with a new generation of armored warfare ground vehicles.

The Army seeks a light, medium and heavy fleet of Robotic Combat Vehicle to support infantry and armored units on the move. The robots are being engineered to operate in tandem with the now-developing OMFV Optionally Manned Fighting Vehicle (Bradley replacement) effort.

An OMFV Congressional Research Service report, citing an Army Robotic Combat Vehicle Campaign plan - says the service requires the RCV - Light to be “less than 10 tons, with a single vehicle capable of being transported by rotary wing assets. It should be able to accommodate an anti-tank guided missile (ATGM) or a recoilless weapon.” RCV-Medium, by extension, can be as heavy as 20-tons and must travel on a C-130 armed with sensors and an ability to fire ATGMs and a medium cannon. Finally, the RCV-Heavy must be a “non-expendable” armed robotic platform transportable by a C-17 and have an ability to destroy enemy tanks and infantry fighting vehicles. While these vehicles can be remotely tele-operated, in the future a single operator will potentially be able to control a small fleet of robotic vehicles using AI.

The RCV acquisition effort, led by Army Futures Command’s NGCV Cross Functional Team, is on a fast track. The Army is now engaged with industry competitors who have submitted white papers and plans to move the acquisition process forward in decided increments in coming years.

The four robots cited by Langhout are now with Army Test and Evaluation Command preparing for safety release before being delivered to Colorado next Spring for further experiments.

“We want to take what we think the requirement is, experiment with it and then see what soldiers think of it,” Langhout said.

By 2023, Coffman explained, the Army expects to have a refined sense of what kind of light, medium and heavy robot mix it will need for the force. Concurrently the service is planning a phased expansion of the scope of robot integration to include a particular growth trajectory moving from platoon-size operations to company-sized and ultimately to brigade-sized units.

“The three different weight classes are payload agnostic so they can have a sensor on them or carry weapons. By 2023 we will make a decision on how to proceed with the robots. Do we search our Light Variants? Mediums? Heavies? Or all three? We will decide based on what we learn from the experiments we conduct,” Coffman said.

Army technology developers routinely discuss the advantages of autonomy in terms of “easing the cognitive burden” upon soldiers by performing organizational and procedural functions to allow soldiers to better focus upon the complex problem solving required by combat.

“We want to enable soldiers to spend more time focused upon how to fight, as opposed to how you want to control vehicles,” Coffman said.

Advanced computer algorithms can gather, organize, analyze and transmit vast, seemingly limitless amounts of information in seconds - they can organize and present crucial combat-sensitive information in seconds. At the same time, there are still many variables or subjective nuances best left to human decision-making.

Autonomous navigation is complex, especially on the ground where objects need to maneuver in relation to other moving objects, terrain and fast-changing combat dynamics. There are naturally fewer obstacles in the sky impeding aerial autonomous flight.

Using advanced computer-enabled autonomy, much of it empowered by AI, is increasingly critical to the Army’s ongoing work to expand and harden its multi-layered tactical combat network.

“This is extremely complicated business with huge autonomy challenges. One of the greatest challenges we are going to have is the network. When you are on the ground and you have robots talking to other robots talking to ground vehicles, you may go behind a rock, down a hill, into a gully or around the corner of a building,” Coffman explained.