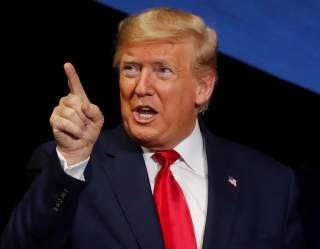 Barring a seismic makeover, Donald Trump is poised to run for reelection disliked by most Americans. Even as his job approval ticks up in recent polls, the public’s view of Trump is largely settled. The RealClearPolitics average has Trump facing a double-digit deficit in personal popularity. Fifty-four percent of the public have an unfavorable opinion about him while 43 percent view him favorably.

What’s more, Trump inspires asymmetric passion among the public. The number of Americans who strongly dislike Trump consistently outnumbers those who view him very positively. The January American Perspectives Survey found that 42 percent of the public had a very unfavorable opinion of Trump while 24 percent expressed a very favorable view of him.

But if Democrats plan to coast by on public antipathy alone, they could be in for a rude awakening. First, Donald Trump was elected in 2016 despite historically low favorability ratings. One week before the 2016 election, a majority (57 percent) of Americans had an unfavorable view of Trump. True, his opponent was historically unpopular as well. But a polarized electorate likely means both candidates will be relatively unpopular this year as well.

Similarly, close to two-thirds (64 percent) of strong Trump supporters say they always vote in elections while fewer than half (48 percent) of those who view him very negatively say the same. And Americans who passionately support the president are more likely to be paying at least fairly close attention to the 2020 election than those who are critical of him (75 percent vs. 66 percent).

Conventional wisdom holds that elections are all about the incumbent’s performance in office and personal appeal. But public disaffection for Trump may not be the most relevant metric to assess his reelection prospects. Trump’s supporters look poised to turn out to support him in large numbers, while his critics’ supporters appear less politically motivated. Democrats will need to offer an appealing candidate and vision for the country if they are to be successful in November.

This article by Daniel A. Cox first appeared in 2020 on the AEI Ideas blog.