Have a Drone? Russia Wants To Make Sure They Can Kill It. 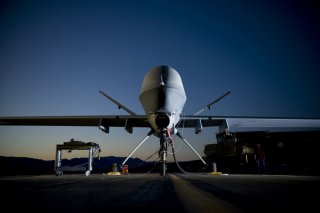 Unmanned aerial vehicles (UAVs), or drones, have the potential to be a force multiplier to be used against an adversary on the battlefield. However, just as attempts are being developed to utilize drones as an offensive weapon, there are now efforts to counter drones.

Last week, the Russian-based Ruselectronics Group, which is part of the state tech corporation Rostec, announced that it has developed a new mobile system, dubbed the Zashchita, to counter unmanned aerial vehicles.

“A mobile counter-drone system that fits into three briefcases has been created,” the Rostec press office told Tass. “The system is capable of jamming drone control within a radius of 2 km irrespective of the time of day and weather conditions, staying invisible and invulnerable to radio countermeasures. It takes no more than 30 minutes to deploy the system.”

The Zashchita counter-drone platform is also capable of detecting a drone operator and disrupting the communications channel to the unmanned aerial vehicle. Additionally, the system’s passive coherent location radar makes it invisible for adversary interceptors, the press office added.

It is also just one method of countering drones that Moscow is developing.

At the recent IDEX 2021 International Arms Show, which took place last month in the United Arabs Emirates (UAE), Rosoboronexport demonstrated a system that was touted to be effective at countering attacks by drones, where it combined electronic warfare and air defense systems.

The new Repellent-Patrol electronic warfare system is reported to be capable of jamming UAVs at a range of up to 20km. It can create what is described as a “protective dome over a facility,” which can act as an impenetrable barrier to repel attacks of separate drones even if the UAVs are coming from different directions and altitudes within a radius of at least 3 km.

Rosoboronexport also demonstrated a number of short-range air defense systems, including the Pantsir-S1M anti-aircraft missile/gun complex and the Tor surface-to-air missile system. Those systems were also designed to be capable of effectively destroying various air attack weapons, including drones. The Pantsir-S1M utilizes missile and gun armament, which eliminates air targets at ranges of up to 30 km and at altitudes of up to 18 km.

“The integrated use of the proposed electronic warfare and air defense assets will enable effective countermeasures against UAVs of any class provided air enemy reconnaissance and automated control systems are in place,” a Rosoboronexport source told Tass.

In December, it was reported that Russia has also considered other anti-drone solutions, including the deployment of a specialized drone-launched net that could allow for the capture of enemy drones. Russia is clearly considering a variety of options to counter an attack of the drones.