The Headdress of the Guards: The History of the Bearskin Caps 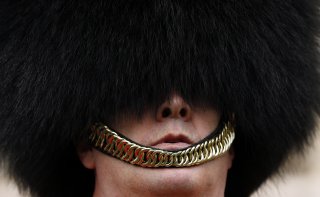 Many forms of military headdress and headgear can be described as iconic and even definitive. But even to those who couldn’t identify most helmets, hats or caps, there is one piece of headgear that is almost universally known – it is the bearskin caps of the soldiers who guard the queen.

That might be putting it in extremely simplistic terms, but it is true that it is actually hard to imagine the stone-like guards outside Buckingham Palace wearing anything but the tall black fur headdress. In fact, when guest regiments fill in for guard duty – which does occur occasionally and now with more regularity—visitors to London and other tourists could be described as disappointed by not seeing the men in their signature red uniforms and tall black hats.

The irony is that these caps, while made at least currently of the fur of Canadian brown bears, are actually of a French origin of sorts. It should also be stressed that whilst the British are the most famous—some would dare say infamous—for wearing the bearskin caps they have been far from the only ones to do so. The truth is that the origins of the bearskin cap go back to the seventeenth century.

This is when the original grenadier units, who actually were charged with throwing a small bombs—known then as grenades—wore cloth caps that were trimmed with fur. Over time the caps evolved, and by the end of the eighteenth century, the grenadiers in the armies of France, Spain and Great Britain were wearing tall fur hats, adorned with front plates. These likely increased in height to make the soldiers seem taller and more imposing—something that was done for similar reasons with military shakos and even civilian top hats.

Bearskin caps were worn up until the outbreak of World War I by grenadier and guard units in Belgium, Denmark, Italy, the Netherlands, Russia and Sweden. But again the most famous remains the British Guard Regiments, including the First Guards who adopted the headgear following the Battle of Waterloo.

The First Guards, more commonly known as the Grenadier Guard was the only regiment in the British Army that directly gained its title from its part in that battle. The guards had adopted the style of headdress, the bearskin cap, which had been used by Emperor Napoleon Bonaparte’s own Guard units. It was at Waterloo where the Old Guard broke, having never done so before. As the British Grenadier Guards were among the units that turned the Old Guard, they were given the honor of wearing the bearskin cap. The headdress, which had since 1768 been worn by the grenadier companies only, was now adopted as the headdress of the whole Regiment of Grenadier Guards.

It is probably confusing to those who don’t understand the difference between the grenadier companies and the Grenadier Guard. The former were again those men actually charged with lobbing the grenades and fighting as “grenadiers.” The latter, whilst called the “Grenadier Guard” is actually a regiment of foot (infantry), and not limited merely to grenadiers.

The original version of bearskin caps for the grenadiers was reported to have been twelve inches in height and made of black-brown fur. On the front was a triangular brass plate, bearing the King’s arms and the regimental title. Under the plate was a small leather peak, which was always hidden by the long fur. This pattern increased in height by the 1820s to be about sixteen inches in height, and still maintaining a small front peak along with the brass plate at the front.

The Grenadier Guard seems to use the same pattern, and beginning in 1831 all three guard regiments began to wear bearskin caps. At this point, the height of the bearskin caps increased again to twenty-one inches, although some sources note that for King George IV’s coronation in 1821 indicate that some plumed bearskins were as tall as twenty-three inches—making it difficult for officer’s to actually ride a horse!

It was during the reign of King George IV that the Guard uniforms were changed, along with the Guard Regiments themselves. The scarlet coatee was introduced, with gray or white trousers and in 1832 the bearskin cap became the official headdress of all three regiments, thus creating the ceremonial uniform that essentially remains in use today.

The Headdress of the Five Guard Regiments

While it is said that the bearskin cap is worn by the “men who guard the queen,” this is only partially accurate. It is worn by the Foot Guards or the Regiments of Foot. The Household Cavalry continues to wear the tall metal dragoon style helmets.

Today there are actually five Guard Regiments, and these can easily be identified by the respective plumes – or in one case lack of plumes – in the bearskin caps (as well as in the grouping of buttons on the tunic). While the 1st Foot Guards Regiment was rebranded the Grenadier Guard, the 2nd Foot Guards are actually an older regiment, because the former had served the Crown for a longer period of time. Founded as “Monck’s Regiment” (named after its original Colonel), it became known soon after as the Coldstream Guards.  Interestingly, as it is among the oldest regiments, it has the motto “Second to None,” and as such when parading with the other Guard regiments is always on the extreme left of the line, with the Grenadier Guards on the extreme right. The final original of the first three guard units was the Scots Guards, which was created to protect King Charles I of England and Scotland, and in the original parading the Scots Guards were in the middle.

Originally all grenadier companies wore white plumes on the left of their headdress, and with the adoption of the bearskins by all the Foot Guards, the Grenadier Guards continued this practice. As the Coldstream Guards were “Second to None,” they adopted a red plume, which was worn right side. The Scots Guards being in the center of the line thus wore no plumes. With the introduction of the plumes the plates on the front, as well as the visors were discontinued, thus giving a more streamlined look to the tall headgear.

In 1900 Queen Victoria ordered the formation of the Irish Guards, who took to wearing blue plume on the right side of the bearskins. This followed in 1915 when King George V ordered the formation of the Welsh Guards, who wore a white/green/white plume on the left side. Thus a simple look at the plumes (or lack of one on the Scots Guards) and you can tell easily enough who is guarding the Queen at any given time.

The Future of the Bearskin

It is also worth noting that bearskin caps were not limited to the foot guards in the British Army, and officers in the Fusiliers did wear bearskin caps, although the ranks actually wear shorter raccoon skin caps. Thus, it is incorrect to call the latter headdress a “bearskin” because it is not. The fusilier caps—the officer bearskin or other ranks raccoon skin—are identifiable by the “flaming bomb” insignia of the Fusilier Regiments.

From the mid-nineteenth century to today the standard other ranks bearskin of the British Foot Guards is eighteen inches in height, it weighs about 1.5 pounds, and is made from the fur of the Canadian black bear. Officer’s bearskins are slightly taller and are made from the fur of Canadian brown bear as the female brown bear has thicker and fuller fur, which is then dyed black. The caps typically cost £650 each to produce.

The continued use of the bearskin is very much in question, however. This is not because there is any talk of amalgamating the regiments (as has been done with countless other famous British Army regiments) but rather a bowing to pressure from animal rights groups including PETA UK, and activists such as Stella McCartney (daughter of Sir Paul McCartney of The Beatles). There has been a widespread call to design a faux fur cap, likely created of synthetic fibers made from petrochemicals.

Interestingly despite the need to use oil in the process, these groups claim it uses 60 times less energy than making a fur coat from raised animals, although the caps have been made traditionally from bears that were culled to keep the population under control. But with the British military reportedly testing the faux furs it seems that the regiments that won the honor on the battle may soon be wearing faux fur caps instead of bearskin.