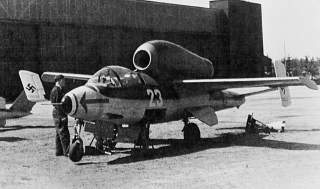 Key point: Germany's desperation to win the war resulted in some questionable decisions.

However, the Volksjäger’s flaws were inextricably tied to the fact it was one of the last gasps of a murderous regime ready to throw away the lives of unwilling slaves and patriotic youth alike in a desperate effort to escape a doom of its own making.