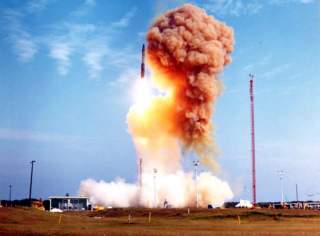 The United States could do without its land-based nuclear weapons. At least, that’s what some experts claimed.

The ICBMs form the ground “leg” of the United States’s nuclear “triad.” The 450 Minuteman III rockets, each in its own hardened, underground silo, are scattered at U.S. Air Force bases across the American midwest.

The Air Force developed ICBMs in the 1950s as a more survivable complement to atomic-bomb-armed heavy bombers. Bombers are vulnerable to air-defenses. By contrast, no existing defensive system reliably can intercept an ICBM or its independent warheads.

But there’s a downside. “Once launched, America’s current generation of ICBM missiles, the Minuteman III, cannot be recalled,” Reuters explained in a special report. “They have no communication equipment because the United States fears on-board gear would be vulnerable to electronic interference by an enemy.”

Bombers and ballistic-missile submarines, by contrast, deploy their nukes closer to the enemy’s cities, meaning the U.S. president might have a few minutes longer to change their mind and cancel an attack.

Reuters cited William Perry, defense secretary under Pres. Bill Clinton, as one critic of the ICBM’s hair-trigger posture. “Responding to a false alarm is only too easy,” Perry said. “I don’t think any person should have to make that decision in seven or eight minutes.”

Leon Panetta, one of Pres. Barack Obama’s defense secretary, also questioned the wisdom of maintaining ICBMs. “There is no question that out of the three elements of the triad, the Minuteman missiles are at a stage now where they’re probably the most antiquated of the triad,” Panetta told Reuters.

The risk of launch error is even greater in Russia, several arms control experts said. The United States has about 30 minutes from the time of warning to assess the threat and launch its ICBMs. Russia for now has less, by some estimates only 15 minutes.

That is because after the Cold War, Russia didn’t replace its early warning satellites, which by 2014 had worn out. Moscow now is only beginning to replace them. Meanwhile it relies mainly on ground-based radar, which can detect missiles only once they appear over the horizon.

In contrast, the United States has a comprehensive, fully functioning fleet of early warning satellites. These orbiters can detect a Russian missile from the moment of launch.

The doubts about the ICBM force are circulating as the world faces its most serious nuclear standoff in years: the heated war of words over Pyongyang’s growing atomic weapons program between Trump and North Korean leader Kim Jong-Un. U.S.-Russian nuclear tensions have increased as well.

U.S. senator Ed Markey, a Massachusetts Democrat, has called for Congress to limit the president’s authority to launch an ICBM on his own. “Donald Trump can launch nuclear codes just as easily as he can use his Twitter account,” Markey said. “I don’t think we should be trusting the generals to be a check on the president.”

“Such a break with decades of practice doesn’t have broad support,” Reuters noted.

The criticism of the ICBM force comes as the Pentagon embarks on a decades-long effort to replace the Minuteman III force with 600 new rockets that would serve through 2070. The new ICBM fleet could cost as much as $85 billion to develop and acquire and another $150 billion to operate over the next five decades.

New ICBMs are part of an overall U.S. nuclear modernization program that could cost $1.25 trillion over 30 years.

It’s possible for a country to maintain a nuclear deterrent only with air- or sea-based systems. The United Kingdom’s four Trident-missile-equipped ballistic-missile submarines represent that country’s sole deterrent.

“One reason arms specialists worry about the ICBM force is that the United States and Russia have come close to committing potentially catastrophic errors multiple times,” Reuters pointed out.

In 1985, for example, a full nuclear alert went out when a U.S. Strategic Command computer showed that the Soviet Union had launched 200 ICBMs at the United States. Fortunately, Perry recounts in his book, My Journey at the Nuclear Brink, the officer in charge realized there was a fault in the computer and that no missiles had been launched. The problem was traced to a faulty circuit board, but not before the same mistake happened two weeks later.

In 1995, then-Russian president Boris Yeltsin had his finger on the button, because the Russians had detected a missile launched from Norway, which they assumed to be American. Russian officials determined just in time that it was not a nuclear missile.