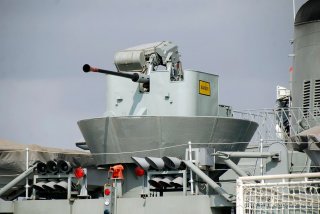 The latest Iranian kerfuffle involved two Iranian ships near the Strait of Hormuz. Unlike previous incidents involving the Iranian Navy, this mishap was a friendly fire accident, rather than a threatening maneuver or provocation. Here’s the Konarak, the Iranian naval ship that was hit and nearly sank.

The Konarak is one of twelve Hendijan-class ships in the Islamic Republic of Iran Navy’s inventory. The Konarak is named after a city in Iran’s southeast coast next to the Gulf of Oman that hosts at least one naval base and other naval support infrastructure.

The Hendijan-class were ordered by Iran from a Dutch shipbuilding company prior to the 1979 Iranian revolution, though Iran didn’t take delivery of the hulls until the late 1980s during the Iran-Iraq war. Before the ships were delivered, there had been talk of canceling the sale due to both the tense political situation with Iran and the country’s wartime situation. Ultimately the sale was not blocked by the Dutch government, as the Hendijan-class were merely support ships designed to be unarmed, and therefore not subject to any export restrictions.

Despite their original role as purely support ships, some of the Hendijan-class had been recently refitted to play an anti-surface ship role. In 2018 at least one of the Hendijan-class, that same Konarak, was retrofitted with a 20-millimeter cannon and can likely fire the Nasr-1 anti-ship missile. The Nasr-1 is probably an unlicensed copy of a similar Chinese anti-ship missile, the C-704.

Iran’s copy is a solid-fuel rocket-powered missile that has a large 150 kilogram, or about 330-pound warhead, and a range of about 35 kilometers, or roughly 22 miles. Though armed with a contact fuse, the Nasr-1 is semi-armor piercing—after contact, the fuse is delayed slightly to allow the warhead to reach maximum penetration before detonation, which transfers more of the blast energy inside the target than a simple contact fuse would.

During a routine training exercise in the Strait of Hormuz, the Konarak was struck by an anti-ship missile fired by the Iranian naval frigate Jamaran during a target practice exercise. It remains unclear if the Konarak was hit due to an automatic targeting error on the part of the missile or due to human error. The Konarak may have failed to keep a safe distance away.

Regardless, reports indicate that 19 Iranian sailors were killed, and 15 injured. Video of the incident showed the Konarak burning after being struck by a missile. Though visibly twisted and heavily damaged, the Konarak did not sink and was towed back to an Iranian port.

This mishap calls Iran’s naval capabilities into question and is particularly embarrassing for a country that just months ago mistakenly shot down a Ukrainian airliner. While Iran’s irregular naval forces are certainly formidable, it seems that the Iranian Navy may still have some training to do.