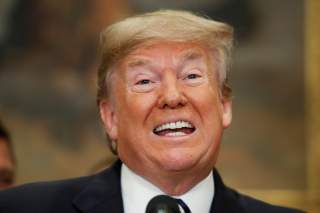 A former U.S. ambassador to NATO offered some unsolicited advice to the next U.S. president for reducing the threat of nuclear war.

Ivo Daalder, who served under former U.S. president Barack Obama, told the nonprofit Ploughshares Fund that whoever wins the presidency in 2020 could reconceptualize nuclear deterrence in order to begin making meaningful progress toward disarmament.

“You need to decide what you want for deterrence,” said Daalder, who now is the president of the Chicago Council on Global Affairs.

That could mean giving up on the idea of nuclear parity between the United States and Russia, Ploughshares’ Joe Cirincione explained. “Removing the obsession with parity -- or matching the Russians warhead for warhead -- is a good start,” Cirincione wrote.

Pres. Donald Trump, who is running for reelection, has loosened the rules governing America’s use of atomic weapons and unilaterally has withdrawn the United States from several nuclear treaties.

Trump’s administration currently is negotiating with the Russian government over the fate of the New Strategic Arms Reduction Treaty.

New START, which caps the American and Russian nuclear arsenals each at 1,550 deployed atomic warheads, expires in February 2021. The treaty emphasizes parity between the two major nuclear powers.

Some experts worry that Trump intends to abandon New START, thus potentially walking away from parity as a guiding principle. Trump has called for the United States to greatly grow its atomic arsenal.

The Trump administration’s cover story for possibly allowing New START to lapse is that it wants a new, three-way nuclear-weapons pact that also involves China. But negotiating a three-way treaty could take years and should not preclude an extension of New START.

"It would malpractice to discard New START in the hopes of negotiating a more comprehensive, ambitious nuclear arms control agreement with Russia and China and getting it ratified and into force,"  Daryl Kimball, an expert with the Arms Control Association in the United States, told The Associated Press.

The next president also should consider abandoning parity, Daalder said. “Parity may matter from a political perspective, but it shouldn’t be the driving force.” But in contrast to what Trump apparently wants, the new president should aim to drive down, not grow, the number of nukes in the world.

To get there, the United States should build its nuclear force-planning and arms-control efforts around the idea of “sole purpose,” Daalder said.

That means “the ‘sole purpose’ of possessing nuclear weapons is to prevent their use by others,” Daadler explained. “If there's another purpose -- if it's to prevent conventional or, or weapons-of-mass-destruction use, for example -- then a world without nuclear weapons might still be one where you want to keep them, even if others don't.”

“But if the only purpose, the sole purpose is to prevent their use by others, if others don't have them, then you don't need them, either,” Daadler added. With “sole purpose” as the driving concept, the U.S. government could drastically reduce its nuclear holdings, perhaps even eliminating one of the three “legs” of the nuclear “triad,” which currently includes sea-, air- and ground-launched nukes.

“It means you can have much more limited forces,” said Daalder. “You can think about your operational status in a different way.”

The Obama administration mulled “sole purpose” but instead chose to focus on negotiating New START.

That was a mistake, Daalder said. “What we really needed in 2009 [when the New START Treaty was under negotiation] was to maintain the verification, data-exchange and transparency regime which was about to expire.” Instead, the administration got hung up on parity.

The next president should do better, Daalder said. He or she should preserve New START, but only as a starting point. “New START is extremely important frankly less because of the limits and more because of the inspection and verification regimes,” Daalder said. “It gives you insight and confidence.”

On the basis of that confidence, the next U.S. administration should announce it unilaterally is cutting back on nuclear warheads. “You make that declaration,” Daalder advised. “You then give real guidance to both the Defense Department, on the military side and the civilian side.”