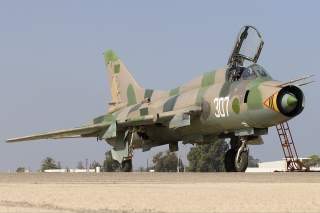 In May 2001 former cold-warriors met at Swidwin air base in Poland. Guy Razer, then a lieutenant colonel in the U.S. Air Force, got a chance to ride in a Polish air force Su-22UM3K Fitter, then the Polish air arm's main fighter-bomber.

Just a few years earlier as an F-111 pilot before the fall of the Berlin Wall, Razer had planned in the event of war to bomb Swidwin in order to destroy the supersonic Su-22s before they could take off.

"It was great flying," Razer, now 61, told The National Interest from his home in Arkansas.

Razer commissioned into the U.S. Air Force in 1982. He flew F-111s and F-15Es and held training and staff jobs in the United States, Europe and South Korea before retiring in 2002. He recalled deploying to Poland in May 2001 under the auspices of NATO's Partnership for Peace program. Poland joined NATO in 1999.

Razer's mission was to begin teaching Polish Fitter pilots how to fly and fight in the NATO style, in larger formations and with greater flexibility.

Poland acquired its first Su-22s in 1984. At its peak in 1988, the Polish Fitter fleet numbered around 110. Under Soviet doctrine, the Su-22 pilots flew single-ship sorties or long-trailing two-ship sorties under strict oversight of controllers on the ground.

"Flying a tactical spread at low level was pretty new to them," Razer said. "They did a lot of depending on radar vectoring."

In the Polish air force in 2001, "the controllers had almost as much control as the pilots," Razer continued. A controller on the ground, closely monitoring a fighter pilot via radar and radio, would even tell a pilot exactly when to pickle his weapons.

"We wanted to free them up," Razer said.

Danish F-16 pilots joined the Poles and Americans at Swidwin and flew their nimble, single-seat jets as aggressors. Swidwin climbed into the back seat of a Su-22UM3K for a mission. "They don't look very pretty but they're pretty operational," Razer said of the 20-ton, single-engine fighter-bomber."

The big, Soviet-made plane "felt muscular," Razer said, but at the same time it was sluggish on takeoff. "The take-off roll didn't seem super powerful, especially since I'd been flying the big-motor f-15E."

The Fitter was "not rickety," Razer said. "It had some brute force to it. The avionics were pretty antiquated." The Polish air force eventually added GPS and other improvements to the big Sukhoi. "Just the addition of GPS would be significant," Razer commented.

Razer recalled thinking that the Polish Su-22 pilots were pretty skilled, given the limitations of Soviet-style doctrine and training. But even in the 1980s, the U.S. Air Force didn't consider the Fitter much of a threat. "But they were a threat enough that we targeted the airfield."

"We were hoping to take out their airfield before they took off," Razer said.

But in 2001, the Poles and Americans were fast friends. "It was instant comradery even though we both knew we were on opposite side a while back,” Razer mused. “There were guys there that had been there when it was Warsaw Pact."

As of early 2019 the Polish air force still operated around 20 Su-22s in a single squadron at Swidwin. Angola, Iran, Syria and Vietnam also still operated the type.