Here Are All of the Advanced Guns the Army Wants 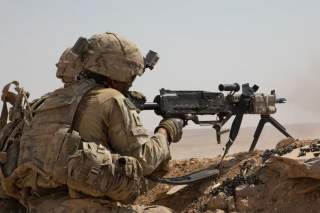 Key point: The Army needs replacements to many of its weapons and is looking for something high-tech and reliable to fill those gaps.

The U.S. Army is testing submachine guns in advance of what could be its first official sub-gun in more than fifty years. The Army's Sub Compact Weapon System program is scouting the field for a weapon that delivers assault-rifle level firepower in a platform smaller than the M4 carbine. The gun is destined for the service's Personal Security Details but could be expanded to wider use throughout the Army.

The submachine gun was first invented in World War, a product of trench warfare. European armies on the Western Front saw the need for a compact, high-firepower weapon useful for clear trenches of enemy troops, a task the bolt action rifle was ill-suited for. The result was a wave of fully automatic, compact weapons with shoulder stocks, typically firing pistol caliber ammunition.

Submachine guns continued to be popular in World War II, where they were useful in jungles and fighting in built-up areas such as cities. After the attack on Pearl Harbor, the U.S. Army went to war with the famous M1928A1 Thompson submachine gun. The Thompson, made famous by police and gangsters like during the 1920s and 1930s was well-liked, though complicated and slow to mass produce.

The Army, needed a simpler, easier to manufacture design to supplement the “Tommy Gun” and the result was the M3 “Grease Gun,” also in .45 ACP. Adopted in 1944, the M3 was used throughout the latter half of World War II and the Korean War. The gun mostly fell out of circulation except with some National Guard armored units, which carried them as late as 1991’s Operation Desert Storm. The U.S. Army’s Delta Force also used the M3 early in the unit’s career, reportedly due to the .45 ACP round’s lack of deep penetration, a useful feature on hijacked airliners.

The U.S. Army has eschewed submachine guns, even as its NATO allies continued to use designs such as the British Sterling, Italian Beretta M12S, and the Israeli Uzi. The Army streamlined its small arms to a long gun and a handgun, with the long gun taking the form of the M14 battle rifle, M16 assault rifle, and now M4 carbine. While this has simplified the Army’s global logistics, it’s also been less than ideal for infantry riding in troop carriers, vehicle crews, and rear area troops.

Now, seventy-four years after the adoption of the M3, the Army is looking at submachine guns again. The Army’s Project Manager Soldier Weapons recently posted a solicitation for a Sub Compact Weapon (SCW) System. The solicitation asked the firearms industry for a submachine gun-sized weapon chambered in nine millimeter Luger (the same as the new M17/M18 Modular Handgun System) with the ability to fire fully automatic, a Picatinny rail for attaching lights and optics, and the ability to install suppressors. Furthermore, the original solicitation was pulled and quickly replaced with a new one that included suppressors as part of a trials package.

According to the Army, the goal of the program is, “to acquire a highly concealable SCW system capable of engaging threat personnel with a high volume of lethal force while accurately firing at close range with minimal collateral damage.” The sub-guns are reportedly destined for the Army’s Personal Security Details (PSDs), troops that act as bodyguards for army generals and their staffs in forward areas. PSDs originated in the Iraq War to protect command personnel that traveled in less than secure areas. The Army intends to buy up to 1,000 SCWs.

The SCW program could actually grow much bigger if the Army sticks to its small arms roadmap. The service is interested in procuring a new cartridge, possibly in 6.8-millimeter, for its Next-Generation Squad Automatic Weapon and next-generation carbine. The 5.56-millimeter M4A1 carbine has relatively low recoil and is small enough to easily fit inside vehicles and other enclosed spaces. A 6.8-millimeter weapon would ideally be more lethal and have a longer range, but the price would be a heavier and possibly bulkier weapon that requires more training to use effectively. Rear area troops such as unit staffs, truck drivers, maintainers and other combat service support troops require a more compact weapon. They also practice at the range less often and so may be better off with an SCW-type weapon for self-defense.

If all goes according to plan, the U.S. Army will field a new submachine gun in the near future, in addition to a next-generation carbine and next-generation squad automatic weapon. Along with the new M17 handgun, the Army could very well introduce a totally new slate of small arms for future fights within a relatively short time, and one that is tailored to the needs of the soldier. The result could be the most technologically advanced, practical, and lethal small arms arsenal ever to arm the U.S. Army.

Kyle Mizokami is a defense and national-security writer based in San Francisco who has appeared in the Diplomat, Foreign Policy, War is Boring and the Daily Beast. In 2009, he co-founded the defense and security blog Japan Security Watch. You can follow him on Twitter: @KyleMizokami. This first appeared in August 2018.