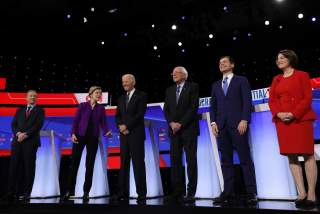 This year, the official election season for the Democrats starts later than the recent past.

The Iowa caucuses will be held on February 3, the latest date since 1996. The final contest, the Virgin Islands caucus on June 6, will be the last primary or caucus event for Democrats in 2020. If no candidate is a clear winner by that point, even the islands’ 13 delegates, seven of whom are at-large delegates, could matter.

In a post earlier this year, Josh Putnam of FrontloadingHQ (the invaluable site that explains intricate delegate allocation) examined the rules that apply to the Virgin Islands’ delegates. He concluded that if the contest remains active heading into the Virgin Islands contest, “then the delegate math (and the subtle intricacies therein) may be of some consequence.”

Then again, he continues, “a share of [the Virgin Island’s] seven delegates is not all that likely to make or break anyone at the end of the calendar.”  He concluded, “But it would be something if it was.” And the Virgin Islands is hardly the most consequential late contest. On June 2, DC, Montana, New Jersey, New Mexico, and South Dakota are scheduled to hold their Democratic primaries, awarding approximately 215 delegates in total (about five percent of all delegates). These could be very important if there is no clear winner by that point.

For comparison, the first four states Iowa, New Hampshire, Nevada, and South Carolina may have outsized influence in terms of media attention, but together, they will award 155 delegates — about four percent of the total number of delegates.

This article by Karlyn Bowman first appeared at the American Enterprise Institute.