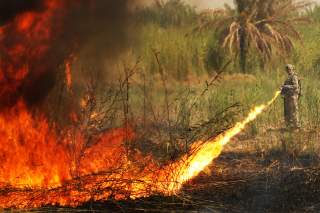 In mid-August 2013, the People’s Daily, an organ for the Central Committee of the People’s Republic of China published a photoset of army exercises in Lanzhou. The exercise included some of China’s latest armored vehicles in action against an imaginary adversary.

But one of the photos was peculiar: it showed two men on their bellies with metal tanks strapped to their backs, great gouts of orange fire scorching a hillside. China’s state-owned CCTV network recently aired video of flamethrowers in action, as well.

The news that the People’s Liberation Army still uses flamethrowers is a bit surprising. Most of the world’s military powers abandoned the weapon long ago — the American military hasn’t fielded them for 40 years. The wars in Afghanistan and Iraq have seen retro weapons re-introduced into battle, but the flamethrower was not one of them.

The flamethrower was a one-trick pony, and although that trick — setting people on fire — was pretty keen, it had shortcomings that left it vulnerable to being replaced by a new generation of weapons.

The flamethrower is dead to America. And while the idea that we no longer roast our enemies alive sounds like progress, the truth is, we only gave it up because something better came along.

There are a lot of ways to die when a flamethrower enters your life.

You can be licked by a tongue of hot flame burning at 1,200 degrees centigrade. You can be drenched in foul-smelling gasoline and then burned alive. You can — barricaded (safely, so you think) in a bunker or cave — suffocate as a flamethrower sneaks up and sucks the oxygen from the air around you. You can be next to a man carrying a flamethrower when he suddenly explodes, setting everyone around him on fire.

A flamethrower typically consists of a backpack holding one or more tanks of highly flammable material, usually gasoline or napalm. This is coupled with a smaller tank of pressurized inert gas, such as nitrogen, which acts as the propellant.

The backpack is connected by hose to a mechanism not unlike a garden hose nozzle, with a small jet of flame at the tip. When the trigger is pulled, the pressurized gas mixes with the flammable material, shoots out the tip of the nozzle, and is set fire by the flame jet. The result is a great tongue of flame arcing forth like the water from a hose.

Like a lot of other really horrible things, modern flamethrowers were introduced in the First World War. The German army was the first to use them, and the Allies were quick to follow suit. Improved models followed in the Second World War, where they were used in the ruins of Stalingrad and the tunnels of Iwo Jima.

At the time, they were invaluable in military operations against difficult, dug-in enemies. The last flamethrowers fielded by the two superpowers, the American M-9A1 and the Soviet Union’s LPO-50, were introduced in the 1950s and 1960s, respectively.

Flamethrowers have two methods of attack: the “hot shot” and the “cold shot.” The hot shot is what most people are familiar with: the big, sizzling, terrifying jet of flame. A “cold shot” is when the flamethrower fires raw fuel at a target.

This allows the fuel to soak into a target, pour down into a cave, through cracks in windows, and into hatches and vision slits in armored vehicles. A cold shot is followed up by a hot shot, which ignites the standing fuel, making for an even more devastating attack.

Flamethrowers have an undeserved reputation, encouraged by war movies, as an occupational hazard for those unfortunate enough to have to carry them. Usually, this is a means to evoke instant pity, since more often than not, flamethrower men on the silver screen are destined to violently explode when shot.

In reality, the inert gas propellant will prevent the gas tanks from exploding. However, if nitrogen isn’t handy and air is used as a propellant, a flamethrower tank will occasionally explode if struck by a tracer bullet. This was probably not of much consequence to the flamethrower man, who was more likely to be killed by a bullet, but it did make him unpopular with his fellow soldiers.

More than other weapons, flamethrowers are terror weapons. Despite the fact that flamethrowers were but one of many ways to die on the battlefield, they had a special terror.

All humans have a lot of experience with, and a healthy fear of fire and being burned. The Germans, after inventing flamethrowers, used them together in teams of six in order to generate a maximum psychological effect. It is generally thought that the bulk of flamethrower-generated casualties are not from fire but enemies bolting from cover in a panic and exposing themselves to gunfire.

Flamethrowers are also effective for their their propaganda value; they are dramatic and make for great photos. Want to evoke ruthlessness? Show your troops using a flamethrower.

Despite the age of such weapons, that was probably what the propaganda-minded People’s Daily had in mind.

Contrary to popular belief, flamethrowers are not illegal. The Protocol on Prohibitions or Restrictions on the Use of Incendiary Weapons, an international agreement that covers the use of incendiary weapons, mainly concerns itself with the use of such weapons on or near civilians. It does not ban any particular weapon and military personnel are fair game.

Running out of fuel

Aside from their propaganda value and the terror it causes, the flamethrower’s shortcomings were quickly apparent when deployed on the battlefield. They were very short range weapons — usually 20 meters or less. The trenches of the First World War were often separated by much greater distances, making the flamethrower useless. Perhaps the biggest danger with carrying a flamethrower was all the hazards in getting within range of the target.

Why did flamethrowers flame out? It wasn’t for humanitarian reasons: armies use weapons until they are obsolete, and that usually happens when something better comes along. The answer is that the flamethrower was replaced by a wide array of projectile launchers, from grenade launchers to rocket launchers to recoilless rifles.

All of the new options could attack targets more effectively at far greater distances, including tanks. Weapons such as the now-ubiquitous RPG-7 can kill tanks at 200 meters, more than ten times farther than the range of a flamethrower.

Even better, the RPG can be equipped with a variety of warheads to attack different targets: high explosive rounds for infantry and soft targets; and high explosive, anti-tank rounds for armored vehicles. No longer are armies forced into attempting to use burning fire as a solution to every problem.

Innovation in warfare marches on, and the latest weapon to fit the flamethrower role, thermobaric weapons, basically does to the human body with high pressure waves what flamethrowers did with flame.

Down the road, lasers may saw people in half, self-guided drones may hunt individuals across the battlefield, viruses could cause weapons to turn on their owners and other terrors could be unleashed from across the electromagnetic spectrum.

We may live to see flamethrowers as quaint reminders from a simpler time.