Here Comes 1984: China's Regime Is An Existential Threat to the World 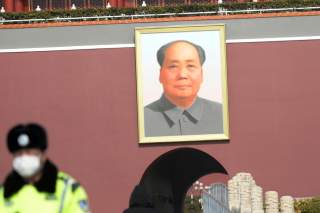 The Chinese communist government increasingly poses an existential threat not just to its own 1.4 billion citizens but to the world at large.

China is currently in a dangerously chaotic state. And why not, when a premodern authoritarian society leaps wildly into the brave new world of high-tech science in a single generation?

The Chinese technological revolution is overseen by an Orwellian dictatorship. Predictably, the Chinese Communist Party has not developed the social, political, or cultural infrastructure to ensure that its sophisticated industrial and biological research does not go rogue and become destructive to itself and to the billions of people who are on the importing end of Chinese products and protocols.

Central party officials run the government, military, media, and universities collectively in a manner reminiscent of the science-fiction Borg organism of “Star Trek,” which was a horde of robot-like entities all under the control of a central mind.

Western-trained Chinese scientists soon were conducting sophisticated medical and scientific research. And they often did so rapidly, without the prying regulators, nosy elected officials, and bothersome citizen lawsuits that often burden American and European scientists.

To make China instantly rich and modern, the communist hierarchy—the same government that once caused the deaths of some 60 million innocents under Mao Zedong—ignored property rights. It crushed individual freedom. It embraced secrecy and bulldozed over any who stood in its way.

In much the same manner that silly American pundits once praised Benito Mussolini’s fascist efforts to modernize Depression-era Italy, many naifs in the West praised China only because they wished that their own countries could recalibrate so quickly and efficiently—especially in service to green agendas.

But the world is learning that China does not just move mountains for new dams or bulldoze ancient neighborhoods that stand in the path of high-speed rail. It also hid the outbreak and the mysterious origins of the deadly coronavirus from its own people and the rest of the planet as well—a more dangerous replay of its earlier effort to mask the spread of the SARS virus.

The result was that thousands of unknowing carriers spread the viral plague while the government covered up its epidemic proportions.

China, of course, does not wish to have either its products or citizens quarantined from other countries. But the Chinese government will not allow foreign scientists to enter its country to collaborate on containing the coronavirus and developing a vaccine.

No wonder internet conspiracies speculate that the virus was either a rogue product of the Chinese military’s bioengineering weapons lab or originated from bats, snakes, or pangolins and the open-air markets where they are sold as food.

It is hard to believe that in 2020, the world’s largest and second-wealthiest county, which boasts of high-tech consumer products and gleaming cities, has imprisoned in “re-education camps” more than 1 million Uighur Muslims in the manner that Hitler, Stalin, and Mao once relocated “undesirable” populations.

China seems confident that it will soon rule the world, given its huge population, massive trade surpluses, vast cash reserves, and industries that produce so many of the world’s electronic devices, pharmaceuticals, and consumer goods.

For a year, the Chinese government has battled massive street demonstrations for democracy in Hong Kong. Beijing cynically assumes that Western nations don’t care. They are expected to drop their characteristic human rights advocacy because of how profitable their investments inside China have proven.

Beijing was right. Few Western companies complain that Chinese society is surveilled, regulated, and controlled in a nightmarish fashion that George Orwell once predicted in his dystopian novel “1984.”

All of these recent scandals should remind the world that China got rich by warping trade and stealing technology in much the same way that it deals with epidemics and dissidents. That is, by simply ignoring legitimate criticism and crushing anyone in its way.

If the Chinese communist Borg is willing to put millions of its own citizens at risk of infection and death, why would it care about foreigners’ complaints that China is getting rich and powerful by breaking international trade rules?

The truth about President Donald Trump’s decision to call China to account over its systematic abuse of international trade norms is not that Trump’s policy is reckless or ill-considered. It’s that at this late date, the reckoning might prove too little, too late.

His article first appeared in The Daily Signal on February 20, 2020.