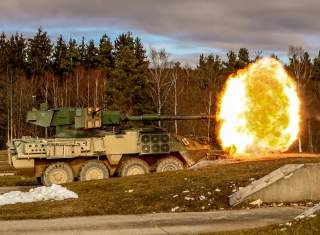 The Army is in the process of arming its fleet of Stryker with laser weapons and small vehicle-launched “hunter killer” drones to bring a new attack possibilities to the platform as it evolves into a modern threat environment.

Stryker maker General Dynamics Land Systems has been testing an integrated sensor-shooter drone system mounted on the vehicle itself. A small, vertical take off surveillance drone, called the Shrike 2, launches from the turret of the vehicle to sense, find and track enemy targets. Then, using a standard video data link, it can work in tandem with an attack missile to destroy the targets it finds. The technology is intended to expedite the sensor-to-shooter loop and function as its own “hunter-killer” system.

“A missile warhead can be launched before you show up in town. It has a sensor and killer all in one platform. Let’s reach out and kill the enemy before we even show up,” Michael Peck, Enterprise Business Development, General Dynamics Land Systems, told Warrior Maven in an interview last Fall.

Peck added that the Stryker-launched drone system could make a difference in a wide range of tactical circumstances to include attacking major power mechanized formations and finding terrorist enemies blended into civilian areas.

“It will go out in an urban environment and it will sense and find your shooter or incoming rpg,” Peck added.

The Army is also developing a Mobile High-Energy Laser weapons system, which has been testing on Strykers in recent years. Firing a 5kw laser, a Stryker vehicle destroyed an enemy drone target in prior testing, raising confidence that combat vehicle-fired laser weapons could become operational in coming years.

The laser weapon system uses its own Ku-band tracking radar to autonomously acquire targets in the event that other sensors on the vehicle are disabled in combat. It also has an electronic warfare jamming system intended to take out the signal of enemy drones.

Lasers can also enable silent defense and attack, something which provides a substantial tactical advantage as it can afford Stryker vehicles the opportunity to conduct combat missions without giving away their position.

Lasers also bring the substantial advantage of staying ahead of the “cost curve,” making them easier to use repeatedly. In many instances, low-cost lasers could destroy targets instead of expensive interceptor missiles.