Here Is How America Can Increase the Pressure on China 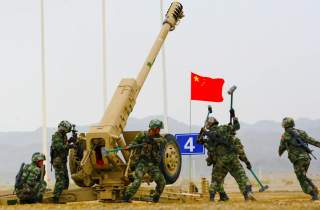 Key point: Checking Beijing’s expansionist ambitions can be done without risking too many lives or breaking the bank.

The following is adapted from a recent report by the Center for Strategic and Budgetary Assessments, Tightening the Chain: Implementing a Strategy of Maritime Pressure in the Western Pacific.

The U.S. military has a problem in the Western Pacific: the tyranny of distance and time. Delivering military force across the vast Pacific Ocean has never been easy, even for a country as blessed in resources and ingenuity as the United States. The problem has worsened as America’s chief regional rival, China, has improved its ability to harm American interests quickly and with limited forewarning. Seventy years after Mao Zedong proclaimed the People’s Republic of China, China’s military capabilities have matured to the point where, if directed by the Chinese Communist Party (CCP), the People’s Liberation Army (PLA) could launch a rapid attack to change the status quo, including territorial seizure, before the United States could meaningfully respond, thus presenting Washington with a fait accompli. American forces located outside the conflict area would have to penetrate China’s anti-access/area-denial (A2/AD) network to restore the status quo ex-ante, a daunting proposition. Under these circumstances, Washington might face the unenviable choice of doing nothing or escalating to higher levels of violence. Either way, the national interests of both the United States and its closest allies would suffer dramatically.

To address this challenge, a new CSBA report proposes a U.S. military strategy of Maritime Pressure and a supporting joint operational concept, “Inside-Out” Defense, to stabilize the military balance in the Western Pacific and deny China the prospect of a successful fait accompli. The report goes beyond previous studies by outlining a new operational concept, assessing potential Chinese responses, and estimating the budgetary costs of implementing it.

For example, in the direst scenario involving an all-out PLA attack on Taiwan, U.S. and allied military forces would have to respond in force quickly, within hours or days, to thwart a Chinese fait accompli attempt. U.S. and allied forces would not have weeks or months to concentrate in mass near the theater of operations and then counterattack before China seizes control of Taiwan or forces the Taiwanese government into submission. Nor would friendly forces have time to fight their way to decisive points in the battlespace if they begin the conflict outside China’s A2/AD bubble. Moreover, attempting to rollback Chinese gains and liberate Taiwan after the fact would be difficult, costly, and potentially escalatory.

American policymakers are right to worry about such a scenario. History shows that deterrence is more likely to fail when an aggressor believes it can pull off a fait accompli successfully. If Chinese leadership believes it can achieve gains through aggression quickly and without paying steep costs in blood, treasure, and reputation, it may be tempted to escalate a crisis to open conflict.

As a deterrence by denial strategy, Maritime Pressure aims to persuade Chinese leaders that attempting military aggression in the Western Pacific will fail, thus discouraging them from trying it. The strategy uses the geography of the First Island Chain—the barrier formed by Japan, Taiwan, the Philippines, and maritime and peninsular Southeast Asia—to deny Chinese military supremacy within, and constrain China’s access beyond, the Western Pacific during crisis or war. Specifically, it aims to thwart Chinese sea control, air superiority, and information dominance, conditions viewed by Chinese leaders as essential to military victory, in order to reduce the Chinese leadership’s confidence in its ability to control the course and outcome of a future conflict, thus bolstering deterrence. In short, by creating doubt in the minds of Chinese leaders about the prospects of a fait accompli gambit, Maritime Pressure discourages them from attempting it in the first place.

As a defense-oriented denial strategy, Maritime Pressure can complement or substitute for alternative approaches such as blockade operations or punishment strikes against mainland China. Those alternatives, although potentially useful as part of a broader campaign to prevail in a protracted conflict with China, would likely not achieve success rapidly enough to thwart a fait accompli, and could escalate the conflict beyond the risk tolerances of U.S. and allied political leaders. Without a strategy designed to prevent a fait accompli, the United States might lose a war before alternative approaches have time to be effective. At a minimum, Maritime Pressure could buy the United States and its allies time, creating the space for other approaches to take effect.

Inside-Out Defense as a Point of Departure Operational Concept

A strategy of Maritime Pressure requires a supporting operational concept that can balance the need to respond rapidly enough to offset the U.S. military’s time-distance challenge without having to physically concentrate U.S. forces on a small number of large, close-in bases that are highly vulnerable to China’s robust area denial capabilities. That is, the operational concept must allow the U.S. military to create the virtues of mass rapidly without the vulnerabilities of concentration.

Inside-Out Defense combines lethal and resilient “inside” forces able to fight and persist within highly contested environments with agile “outside” forces capable of fighting from standoff distances or penetrating A2/AD networks. Together, these inside and outside forces could create a responsive, yet survivable, forward defense-in-depth in the Western Pacific capable of rapidly blunting Chinese aggression at the outset of a conflict. To use a football analogy, the inside forces would act as a defensive line while the outside air and naval forces acted as linebackers. While China may control the snap count, the “Inside-Out Defense” concept will demonstrate that the U.S. is ready to play. 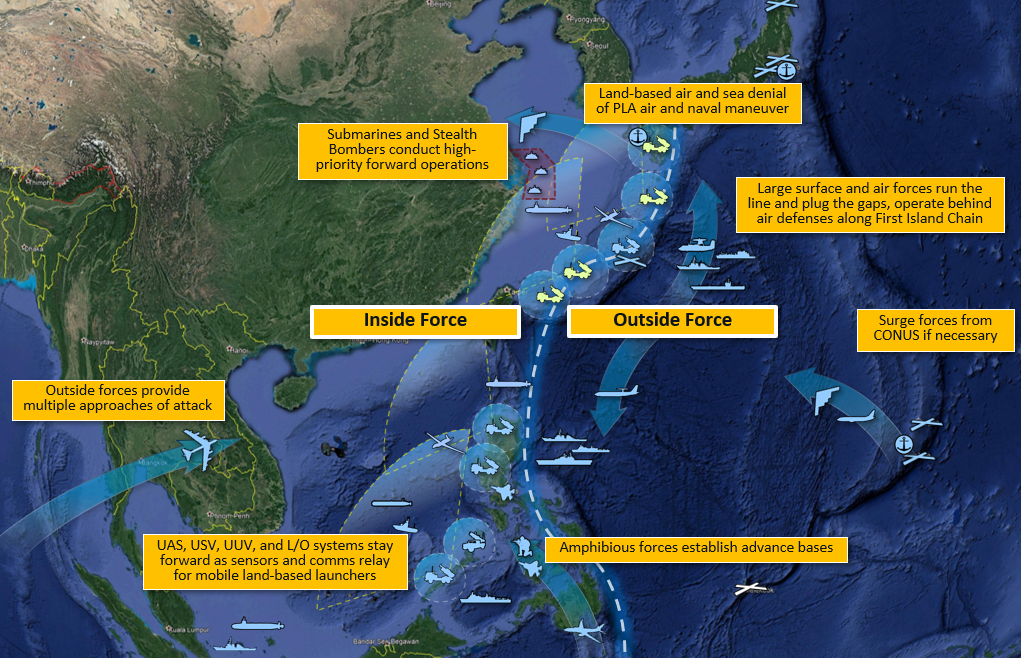 Inside forces: Below the level of armed conflict, inside forces forward postured in the Western Pacific would provide a persistent, combat credible signal of U.S. commitment, which should give Chinese leaders pause by complicating their decision calculus and undermining their confidence in their military plans. In the event of conflict, they would exploit the region’s maritime geography and assume a dispersed, resilient posture along the First Island Chain to form an initial defensive barrier that could immediately challenge Chinese military operations and play three key roles. First, they would contest what Chinese doctrine has identified as necessary prerequisites for conducting a successful military campaign: air superiority, sea control, and information dominance. Second, they would attack Chinese power projection forces to delay and deny their ability to achieve objectives through aggression, such as seizing the territory of U.S. allies or partners, while blocking China from projecting power beyond the First Island Chain. Third, they would degrade key Chinese systems to create gaps in China’s A2/AD networks that outside forces could then exploit.

Mobile and dispersed ground forces—and amphibious forces ashore—would form the backbone of these inside forces. Leveraging the inherent survivability of mobile, hard-to-find ground forces augmented with counter-detection aids, such as camouflage, concealment, and deception (CCD), the inside forces would transform the First Island Chain’s archipelagos into defensive bastions bristling with multi-domain capabilities such as sensors, missiles, and electronic warfare systems. Undersea platforms, both manned and unmanned, could operate within or near the East China Sea and South China Sea to augment these island bastions as part of the inside forces.

Outside forces: Primarily consisting of air and naval surface forces, outside forces would provide a flexible and agile element to support the units arrayed along the First Island Chain. The overwhelming mass of U.S. combat power would reside in these outside forces. In the event of conflict, they would back up the defensive barrier and provide defense-in-depth in the Second Island Chain. If necessary, they could surge forward to plug any gaps in the defensive barrier of inside forces created either by lack of U.S. access to allied or partner territory or through attrition from Chinese attacks. By employing standoff and penetrating capabilities, these outside forces could exploit gaps in the Chinese A2/AD complex created by the inside forces in order to augment defensive operations with additional mass and conduct offensive operations. Outside forces could also leverage their greater freedom of maneuver to conduct other priority missions, such as holding Chinese overseas assets at risk or interdicting Chinese maritime commerce.

Sea denial: From distributed positions along the First Island Chain, ground forces equipped with launchers capable of firing ASCMs or anti-ship ballistic missiles (ASBMs) could attack Chinese surface ships, creating gaps in China’s outer defenses that outside air and surface forces could then exploit. Undersea forces, including both manned and unmanned platforms, could augment inside ground forces by acting as forward sensors and conducting torpedo and ASCM strikes against Chinese ships, as well as provide the principal method of defeating Chinese undersea forces within the First Island Chain. Surface combatants, 4th generation fighters, and legacy bombers, operating over ground-based air defense bubbles along the First Island Chain, could also support sea denial operations with long-range ASCMs. Other stealthy platforms could operate forward to conduct maritime strikes and act as sensors for land-based missiles. Equipping distributed ground forces with a family of missiles with greater ranges than ones they currently possess (Figure 2) would hedge against more restrictive access for U.S. forces on allied and partner territory, enable ground forces to attack PLAN forces operating closer to China and in the Taiwan Strait, and provide more robust fields of overlapping anti-ship fires.