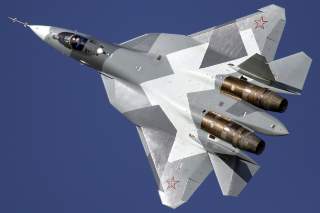 Russian President Vladimir Putin announced at a Kremlin meeting that the Russian Defense Ministry plans to procure 76 Su-57 fifth-generation fighters by 2028, himself acknowledging that these new quantities dwarf previous Russian defense ministry estimates: "The 2028 arms program stipulated the purchase of 16 such jets… In the nearest future we will sign a package contract to supply 76 such jets equipped with modern weapons of destruction and provided with the necessary land infrastructure."

The announcement defies the western defense analysis consensus, which concluded that the Su-57 will not enter production until the late 2020’s. Even then, it was alleged that Russia lacks the industrial output to churn out Su-57 fighters in militarily meaningful numbers.

If the Kremlin’s new forecast proves to be accurate, what accounts for this drastic output increase?

The Russian Defense Ministry was apparently successfully in re-negotiating the price, convincing the manufacturer to mark down the Su-57 by a hefty twenty percent: “We have agreed to purchase 76 such fighters without the increase in prices in the same period of time,” according to Putin. Whether this is a temporary concession, or a permanent discount on the part of the United Aircraft Corporation (UAC) remains to be seen. It is likewise unclear whether or not the price reduction will be accompanied by any possible stripping of the Su-57’s features.

According to the major Russian news outlet Kommersant, the price reduction partly stems from “changes in its [Su-57’s] internal layout” and “integration of technical solutions.” Citing Russian defense industry sources, Kommersant notes that serial production brings with it economies of scale that allow for more cost-effective manufacturing methods.

But even assuming all these assorted logistical and technical improvements, the financial numbers are hazy at the very least. As of the time of writing, the deal to be signed between the Kremlin and UAC comes in at 170 billion rubles or approximately 2.6 billion dollars, according to Kommersant’s sources. This would put the cost of an individual Su-57 at just over 30 million dollars, making it significantly cheaper than the older Su-35. Furthermore, it is unclear how a 20 percent price decrease can pay for an almost five-fold output increase.

But to cling to specific numbers is to miss the point of how the Russian military-industrial complex is structured. Unlike Lockheed Martin or Boeing, UAC is a majority state-owned corporation—as of last year, the Russian government controls 93 percent of UAC’s market share. Whereas American fighter jet pricing is the result of an ongoing, often contentious bargaining process between the manufacturer and US defense department, the Kremlin wields tremendous unilateral power in setting price ceilings for their subsidiary manufacturers; the manufacturers, in turn, get to write off their losses against Russia’s federal defense budget.

The Russian government is willing to manufacture the Su-57 at a negligible 3-5 percent profit margin—or even at a loss—if it serves national security purposes and plants the seeds of a profitable export trade over the coming decades.