Here's a First Look at the U.S. Navy's Next-Generation Destroyer 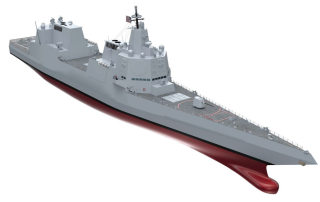 The U.S. Navy is moving forward with conceptual and early design work for its next-generation destroyer.

The DDG(X) is expected to incorporate new technologies in propulsion, power systems, and be able to accommodate a new generation of weapons. It will also include the combat system aboard Flight III ships of the Arleigh Burke class.

“When we upgraded the (Arleigh Burke class) to the Flight III capability, we took up all of the service life allowance on that platform,” said DDG(X) deputy program manager Katie Connelly at the 2022 Surface Navy Association Symposium. “So all of the space, weight, and power has all been allocated. There is not enough room on that ship to put a new combat capability that takes more power or a larger footprint within the ship. So in order to accommodate that and to continue to keep facing the threat in the future, we need to upgrade to a new hull form, hence DDG(X).”

The plan is for the new DDG(X) to operate alongside the Navy’s growing fleet of Arleigh Burke-class destroyers while also introducing new technologies. These capabilities will include more powerful weapons with longer ranges and a new generation of computing ability. The emphasis is to ensure the new warship can keep pace with new threats,” Connelly said.

“Capabilities that we're going to need for the twenty-first century to continue combating the threat are increased missile capability sensor growth, directed energy weapons, which actually require a lot of power, increased survivability, and increased power availability, which is going to come through an IPS system called the integrated power system,” Connelly said. “We are going to execute an evolutionary vice revolutionary technology incorporation process. So the DDG(X) will focus on a new hull form and a new integrated power system. We will use the proven combat system from the Flight III ship, so we are designing the ship with the flexibility and the margins to accommodate the future of the Navy.”

Navy weapons developers and engineers are focused on power and energy storage and distribution. An early rendering of the ship shows plans lasers, thirty-two Mk 41 Vertical Launch System cells and twelve larger missile cells that could be armed with hypersonic weapons.

Supporting these new weapons systems will require new applications for power and energy management. Technology will be able to distribute energy from separate ship systems such as radar, antenna and sensors, to streamline the storage and application of onboard power. This kind of breakthrough system will be necessary to support high-powered weapons systems such as lasers.

“The threat is going to continue to evolve,” Connelly said. “And there will be new threats out there. We on the Navy side will continue to evolve our combat and other capabilities to deter the threat. And we will need a platform that can accommodate those new technologies.”

Connelly said no decision has yet been made on the hull shape despite a rendering of the new ship being released.

“We haven't actually locked down the hull form yet,” she said. “That (rendering) is a concept. It is one of the many options still in play, we do not have our directed whole form, we as the design team, are going through all of the different options to see which one performs best for the long term and the mission … So that's not necessarily representative of what it would look like. So nothing's off the table as far as ship designs go.”