Here's How America Can 'Flatten The Curve' And Survive Coronavirus 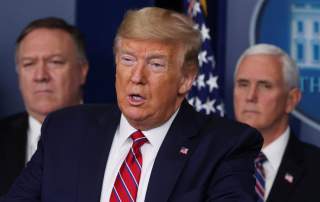 Across many countries, an important strategy to counter Covid-19 is to ‘flatten the curve’. That strategy involves a deliberate attempt to slow transmission of the virus in order to allow the demand for medical services to better fit the resources available. That’s achieved primarily by ‘social distancing’. But there’s a second string to that bow—namely, working at the margin to increase the resources available to deal with the crisis.

We tend, for good reason, to think of medical resources as a relatively fixed quantity. It takes years to train medical staff and, notwithstanding China’s recent—and troubled—display of rapid hospital construction, just as long to build new hospitals. But in the UK, the hunt is on for ways to enhance resources quickly. Opening military field hospitals is one option, but those will be in short supply. Another is to consider turning empty hotels into temporary hospitals.

There’s a degree of opportunism in that approach: it can be done only when the tourism industry is flat on its back. But, sadly, that’s about where we are today—and hotels also need a new source of revenue. National lockdowns and low public confidence levels have further damaged an industry that in Australia’s case was already beset with the challenge of the bushfires.

True, hotels aren’t equipped to be hospitals. In particular, they don’t have oxygen supplies and ventilators, which in this case is an important failing as Covid-19 is a respiratory infection. Still, they do have rooms, beds and commercial kitchens.

The Best Western chain has already offered to turn its hotels into temporary hospitals as a backstop to the UK’s National Health Service—a valuable reminder that Western societies typically harbour a depth of resources that might be useful in crises. The offer was apparently made on the basis that other companies would partner with the chain to provide medical equipment and supplies, a non-trivial qualification.

Of course, the hotels would also need properly qualified medical staff. That hurdle’s also an important one. Because medical services are expensive, Western societies typically run on a ‘just in time’ basis: services are available just in time to meet the need. That’s economically efficient, though it’s achieved by minimising spare—or surge—capacity in the system. Even in normal times, it’s a strategy with little headroom: hospitals struggle to meet their own performance indicators in emergency wards.

Some sort of volunteer organisation—a sort of medical ‘Dad’s Army’—would probably be useful, although in this case it would have to be a volunteer army of the young rather than of the old, leavened by health providers used to setting up and operating in difficult conditions, as companies like Aspen Medical can do. Even then, enthusiasm is no substitute for training. The merely enthusiastic could certainly wipe down surfaces, but their roles would be limited.

Still, training in limited tasks related to hygiene and social isolation protocols could produce a set of usefully skilled volunteers that can help operate those temporary health centres effectively. Medical training needs to be thought of on different levels now. Tasks that can be done by people with minimal training should be delegated to such people, allowing highly trained medical personnel to concentrate on what only they can do.

In the struggle to grow the numbers of medically trained personnel, it’s also possible to imagine the developed world preying on the resources of the underdeveloped, luring suitably qualified personnel to their shores. That strategy would, in the long run, probably backfire: it would pretend that nations can seek individual outcomes against a global pandemic, when the truth is that the medical assets should probably be flowing from the developed world to the underdeveloped in order to promote a better, shared global outcome.

A smarter strategy would do the opposite of preying on weaker nations: it would see the cruise-ship industry as a set of floating temporary health centres able to be positioned near urban centres in countries with weak health systems—Papua New Guinea comes to mind. Setting them up with local and volunteer staff trained in hygiene and social isolation protocols might turn a sector that has been a disease vector into a valued element in controlling and dealing with the pandemic. That will be a way of helping regional partners and will be appreciated during the crisis and perhaps even more so after it has passed.

In World War II, the British developed habits of national resilience. Taking lessons from those practices and that experience might offer useful guidance for Australia in relation to coming challenges. One lesson is to be flexible and adaptable in turning existing infrastructure and resources to new, urgent uses. That’ll depend on re-energising the Australian quality of improvisation and adaption that our history shows has been one of our strengths. Another lesson from wars and other crises is to empower volunteers—again, Australians are probably ready and willing to help others in our community as long as they are trained and equipped to do so as safely as practicable in these troubled times.

Rod Lyon is a senior fellow and Michael Shoebridge is director of the defence, strategy and national security program at ASPI.