Here's How the Trump Campaign Prepped for Impeachment 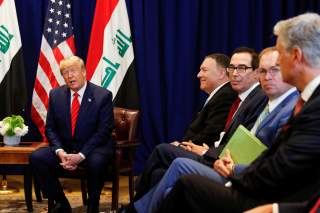 Over the summer, the president’s campaign officials compiled a variety of clips into a 90-second montage showing Democrats bringing up impeachment, according to Politico. Trump is shown between splices asking supporters to “stop this nonsense.”

Aides released the video as part of a counteroffensive to Democratic cries for impeachment earlier in September, Politico reported. The counteroffensive brought in the Trump campaign’s biggest digital gains since the June launch in two days: $8.5 million in contributions and more than 50,000 new donors.

This counteroffensive demonstrated what Politico reporter Alex Isenstadt called Trump‘s “grievance machine,” pointing out that despite the fact that Trump faces one of the biggest threats to his presidency yet, he has been able to direct Republican anger into huge gains for his campaign.

“This approach enables Trump to set the narrative on his terms and paint himself as the iconoclast that is always under attack from the ‘fake news media’ and Democratic ‘witch hunt,’ and it clearly works as they continue to perpetuate it every chance they get,” said Democratic digital strategist Tara McGowan. McGowan worked in 2016 for a pro-Hillary Clinton super PAC.

Trump’s “ability to very quickly define any event or issue on his terms and energize his base” through the internet “provides him with a huge competitive advantage over Democrats,” McGowan added.

Trump has been able to direct messaging about impeachment with the idea that his presidency is under attack. The Trump campaign spent $1 million in Facebook ads asking donors to contribute and assist “in defending the president against these baseless and disgusting attacks,” Politico reported.

Trump campaign manager Brad Parscale has shaped these marketing initiatives, according to Politico.

A Trump campaign official confirmed that the campaign prepared for impeachment talk over the summer.