Here's How We Can Stop The Coming Space Arms Race 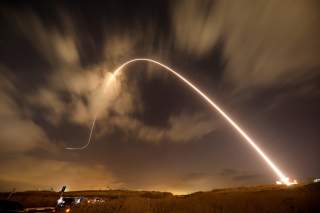 Laws and regulations covering outer space are mired in geopolitical gridlock and are failing to keep pace with burgeoning commercial use of space and new technologies. Dependency on space is increasing both in everyday civilian life and military applications, yet, despite its cross-cutting importance, space security continues to be considered a niche field.

While outer space is often conceptualised as infinite, space that can be used for human activities is a finite resource, much like minerals or fossil fuels. Earth orbits where human space activities in telecommunications, geolocation or satellite broadband can occur are limited in range. In low-earth orbit (LEO), where most space activities and satellites are located, objects ranging in size from a fleck of paint to a school bus are components of the growing amount of space debris. Tracking capabilities can cover only a fraction of those objects.

Think of the earth’s orbits as highways in space, where traffic and congestion are rapidly increasing without the road rules to match. It’s a potential minefield of problems, as collision with debris poses a risk to spacecraft that in worst-case scenarios can escalate into a domino cascade of collisions known as the Kessler effect. As with all limited resources, exercising sustainable practice is key. A failure to manage and minimise space debris will reduce the long-term viability of satellites in LEO and render outer space less usable for future generations.

Antisatellite (ASAT) capabilities are one area in which countries need to be forward-thinking in using regulation to prevent the unnecessary generation of space debris. Such systems are designed to disable or destroy satellites for military purposes. The destruction of a satellite leaves behind a field of debris (though it’s important to note that a satellite can be taken offline without being physically destroyed). The reasons for demonstrating ASAT capabilities range from domestic politics to national prestige to establishing credible space deterrence, so the testing and prevalence of ASAT capabilities are only likely to grow as they continue to be unregulated and viewed as legitimate weapons.

There’s nothing in existing space law that prevents or officially regulates the testing of ASATs and defines an acceptable level of space debris. In 1985, the first ASAT test conducted by the US left behind some 300 pieces of debris, which took 17 years to disintegrate in the earth’s atmosphere. When China destroyed its Fengyun-1C weather satellite in 2007, more than 2,300 trackable (golf-ball or larger sized) pieces of space debris were generated. A second, arguably reciprocal, American test followed shortly after. The latest test occurred in March 2019 in India’s Mission Shakti, which official statements declared was completed at an altitude that ensured a minimal amount of space debris that would soon disintegrate in the earth’s atmosphere, but recent research has cast significant doubt on those claims.

Differing space situational awareness capabilities and a lack of shared big data (which includes independent sources) mean that a test’s impact can be difficult to predict and substantiate. The space domain lacks an independent body that can verify, check and assess the space sustainability of something like an ASAT test. That means the demonstration of force in a test that causes the physical destruction of a satellite is worrying not only for potential conflict, arms races and peaceful norms in space, but for space sustainability too.

However, the possibility of future ASAT tests also presents an opportunity. A recent paper released by the UN Institute for Disarmament Research advocated the adoption of ASAT test guidelines based on the recommendations of the 2013 UN Group of Governmental Experts (GGE) on transparency and confidence-building measures. The report recommended the adoption of three principles based on creating no long-lived debris, creating debris only at low altitudes when necessary and notifying parties when debris is created. Although the principles are largely abided by in a de facto manner, official adoption could strengthen space sustainability norms. The GGE noted that adoption of these three principles would be a much-needed confidence-building measure that could be an interim stepping stone towards greater international regulation that helps prevent the weaponisation of space.

Every ASAT test is perceived as ramping up competition in outer space. Securing even a small win for preventing arms races through guidelines for such tests will be no easy feat, and enforcement is a vexing prospect. However, the utility and symbolic value of adopted guidelines shouldn’t be underestimated as an assurance to states and private actors that ASAT practices will account for long-term space sustainability.

Verification of ASAT tests will necessitate international cooperation and greater dialogue with the private sector. In the words of DFAT Secretary Frances Adamson, countries must engage in ‘preventative outer space diplomacy’ if we are to have any hope of bringing order to the final frontier.

Su-Yin Lew is the international security fellow for Young Australians in International Affairs. Image: US Department of Defense.