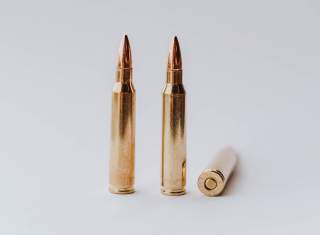 The sales of modern sports rifles are high these days, and many people are flocking to the AR-15.

What exactly, then, is the best ammo to use with your AR for home defense and range practice?

When we say the “best” ammunition, what sets the standard exactly? Generally, the right ammo will, obviously, be accurate. It will also penetrate the recommended 12-18″ of a perpetrator, and will not over-penetrate if you miss.

Moving on, let’s go over a few things to determine the best.

There are two popular types of AR-15 calibers: 5.56x45mm NATO and .223 Remington. While the external dimensions of these two calibers are similar, it is important to understand that they are not in anyway the same.

Rifles that are built to handle the increased pressure of the 5.56 NATO can shoot the .223 Remington, but the reverse is not always likely.

You can always check what yours is by observing the model specs or barrel, which is usually stamped with the rate of caliber and barrel twist.

Though the two are nearly identical, the .223 is a civilian round and the 5.56 is military and may have its own specifications. While the .223 has SAAMI specifications (Sporting Arms and Ammunition Manufacturers’ Institute) the military grade of 5.56 may require higher pressure to go with a higher velocity. 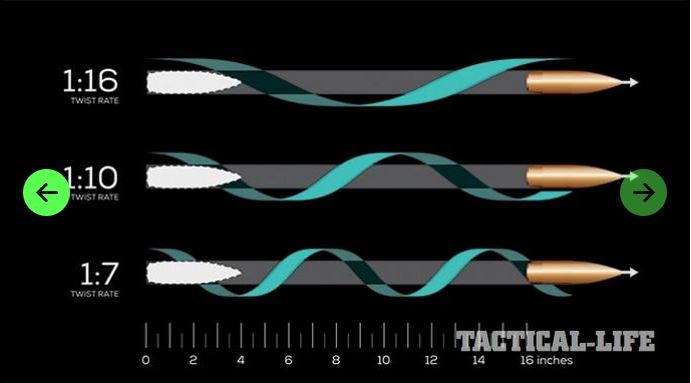 First, let’s look at what a barrel twist actually is. To describe it quickly, it is the rate at which the rifle barrel rotates– or spins. It is represented by inches per turn, and it’s very important that the barrel twist rate is sufficient enough to stabilize the bullet being shot.

Different ammunition types have different barrel twist recommendations. Whatever the number is, it means that bullet will work with a rifle that has a twist rate that matches or is faster.

An example of what a barrel twist rate looks like is one that is a 1:10”, which means it will spin around one rotation in ten inches. If your ammo has a twist rate of 1:10, then it will work with a rifle of that rate, or anything faster which would be rates such as 1:9”. 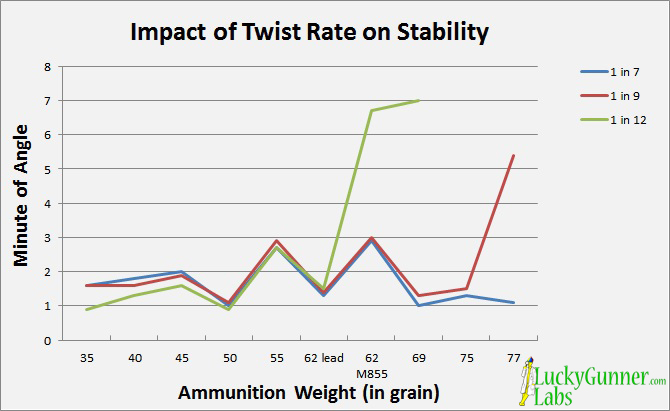 There are different ideal rates for different barrels. The best way to line it up is by the measurement of the grain of a bullet (a grain is the mass of the bullet. 1 pound is the equivalent of 7,000 grains. For more info check out bullet guide). Bullets weigh anywhere between 15 and 750 grains.

Here’s a list of ideal twist rates for barrels:

There are two main bullet groups you’ll notice a lot of. There is the full metal jackets (abbreviated FMJ) and the hollowpoint or softpoint (HP/SP).

There is a form of unwritten guideline that says HP’s are for carry and self-defense while FMJ’s are for the range or practice. While this isn’t an actual rule, many people live by it for similar reasons.

First, FMJ’s are generally cheaper, and not quite as lethally ideal as an HP or SP. That’s not to say it won’t get the job done however, since our military is required to use only FMJ’s due to an international treaty from long ago. 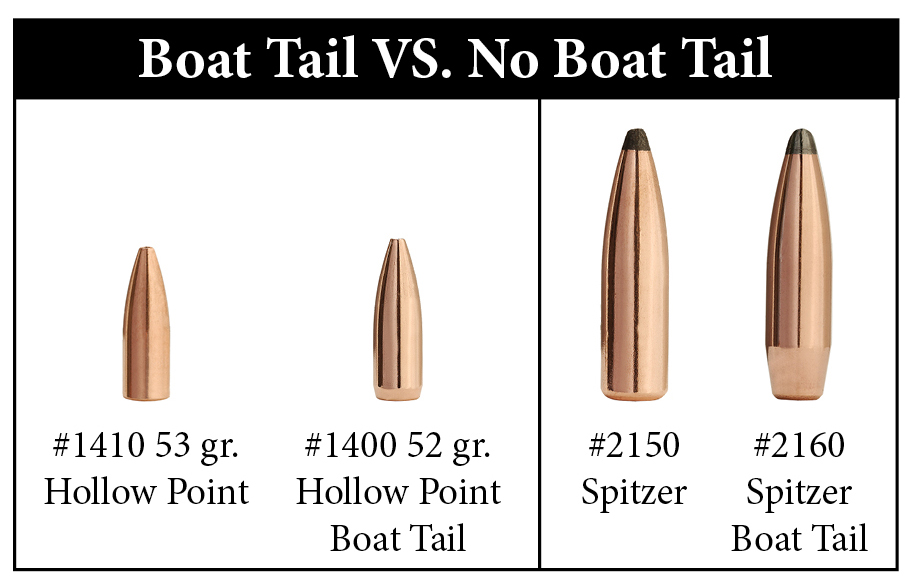 Another acronym you might come across is BT, boat-tail, which refers to the back of a bullet. This one has an aerodynamic shape to it rather than the flat, cut-off look.

When considering military rounds (5.56) you will notice a lot of M193 and M855. Your standard FMJ is going to be the 55 grain M193. This is referred to as “ball” ammo, which generally just means military loading style.

Then you have the 62 grain M855, which is called the “green tip” penetrator round. It contains a steel rod in it. The reason it is green tipped is because it is a hybrid of ball ammo but has a penetrator. Armor piercing ammo will have a black tip, while ball has no colored tip.

Having looked at all that information, let’s move onto some product recommendations. Below is a compiled list of different styles and families of ammo that will suit your different AR-15 needs. You’ll find that the products come from Lucky Gunner because they are a reliable manufacturer.

Because we talked about the standard 55 and 62 grain bullets, we will stick with those for the next section. You’ll also find that the suggested products are mostly brass casing.

This is so you are able to keep the ammunition should you reload your own or want to.

These are best for near-mil spec, in both pricing and availability.

For precision shooting, these 69 gr rounds are much more accurate. They are heavier, boat-tail hollow point bullets.

As we talked about before, green tips are similar to ball ammo but have a penetrator, with a steel piece in it.

You might have noticed PMC mentioned a lot above. They are a reliable brand and a favorite of ours, and you can almost always guarantee there will be stock.

You might also notice the LAP label on these products, which means “Light Armor Piercing.” These aren’t technically armor piercing, and work great for plinking.

Unlike the 5.56 rounds above, if you have a .223 barrel or prefer lighter rounds while shooting, here are our recommendations.

Plinking is the practice of informal target shooting. This can be done with targets like cans, bottles, and any other homemade or natural target. People who practice this form of shooting are known as plinksters.

The following are steel cased so start of small if you’re unsure whether your AR-15’s barrel likes them or not. Not all work well with steel casing.

Keep in mind, also, that they are dirtier and not quite as accurate as brass. Still, for an even cheaper option, they will more than likely work for your target shooting.

(Note that these aren’t saveable for reloading like the brass are. Please check with your range to make sure they allow steel casings/bi-metal.)

The biggest difference between self-defense and range ammo is the fact that you want your defensive ammo to do its job by “putting down” the offender. For this reason, FMJ and penetrators aren’t the best choice, as they don’t break apart or pull a lot of energy.

There are types of ammo specifically for defensive use, such as hollow point. These are common among law enforcement. Here are our top two recommendations:

Having gone over many aspects of AR-15 ammo and terminology, you can walk away knowing 5.56 and .223 are the best, and will be found in 55 gr and 62 gr. FMJ and HP will also determine a lot about the ammo and where it is best suited, and knowing all of this will aid in the barrel twist rate.