Here's What China Said When It Intercepted an U.S. Navy EP-3 Spy Plane 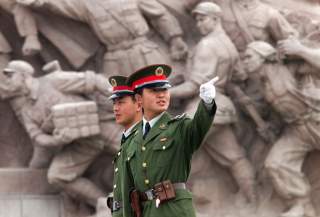 As we have explained incidents such as this are relatively common.

As we have previously reported, a Pentagon spokesman said on Jul. 23, 2017 that the crew of a U.S. Navy EP-3 spy plane had to make evasive actions after an armed Chinese J-10 fighter came within 300 feet of the aircraft.

However as reported by Reuters, Ren Guoqiang, China’s Ministry of Defense spokesman, said on Jul. 25 replying to a question from a reporter that the intercept was “legal, necessary and professional” and performed “in accordance with the law and the rules. Close-in reconnaissance by U.S. aircraft threatens China’s national security, harms Sino-U.S. maritime and air military safety, endangers the personal safety of both sides’ pilots and is the root cause of unexpected incidents.”

Moreover Ren Guoqiang added that the U.S. should immediately stop these military activities, which are unsafe, unprofessional and unfriendly.

As we have explained incidents such as this are relatively common.

In May in fact, two Chinese J-10s similarly intercepted a U.S. surveillance aircraft over the South China Sea in what the U.S. Navy described as an “unsafe” maneuver. Moreover as we have explained earlier that month, two Chinese Su-30 fighters came within 150 feet of a U.S. Air Force (USAF) WC-135 Constant Phoenix plane, with one flying upside-down directly above it. Moreover in 2001, an intercept of a U.S. Navy EP-3 by a Chinese J-8 fighter jet resulted in a collision that killed the Chinese pilot and forced the American plane to make an emergency landing at a base on Hainan.

In a separate news the Pentagon revealed that the U.S. military has carried out another successful test of it’s Terminal High Altitude Area Defense (THAAD) system.

“These tests are done as a routine measure to ensure that the system is ready and… they are scheduled well in advance of any other real world geopolitical events going on,” said Pentagon spokesman Captain Jeff Davis.

According to a statement released by Lieutenant General Sam Greaves, director of the Missile Defense Agency, the test has been carried out at the Pacific Spaceport Complex in Alaska.

Last month the U.S. shot down a simulated, incoming intermediate-range ballistic missile similar to the ones being developed by countries like North Korea, in a test of the nation’s THAAD missile defenses.

Noteworthy the U.S. deployed THAAD to South Korea this year to defend the country against North Korea’s shorter-range missiles threat. That has drawn fierce criticism from China, which says the system’s powerful radar can penetrate deep into its territory.