Here's What Sets the Su-35 Apart from Foruth-Generation Competitors 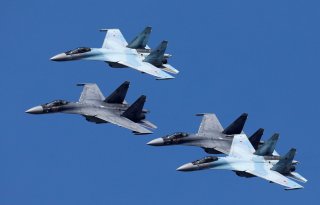 Two different Russian aircraft have been designated as the “Su-35.” In the early 1990s, Sukhoi developed a new experimental fighter called the Su-35, also known as the Su-27M. The M variant was a significant, comprehensive improvement of the earlier Cold War-era Su-27 Flanker airframe.

Soviet engineers designed the Su-27 as an air superiority platform capable of challenging and defeating the United States’ F-15 Eagle and F-14 Tomcat. The Su-27 was also expected to serve in an air defense and interceptor role. It would be capable of shadowing and, if necessary, shooting down American B-1B Lancer and B-52 strategic bombers.

The heavily modified Su-27M airframe did not enter into serial production. However, Russia revived the Su-35 moniker over ten years later. This newer model looks similar to the earlier Su-27 on the outside but incorporates thrust-vectoring engines that improve the airplane’s agility.

One unexpected destination for the Su-35? China. Beijing purchased twenty-four Su-35 airframes from Russia after signing a purchase contract in 2015, though it was not clear from the outset if the deal would materialize.

Reverse engineering by China has been a lingering concern for Russia. China previously copied both the Su-27 and Su-33, using those designs as templates with which to build their own domestic versions of the airplanes. In addition, China’s domestic engine manufacturing ability lags behind that of the Russians, leading some analysts to believe that China might also try to copy the Russian engine designs as well.

One could argue that the Su-35 is perhaps the world’s most advanced 4+ generation fighter in service today. And no doubt, it is indeed a capable fighter. The Su-35 has a good combat radius, a high ordinance loud-out, and can target opposing aircraft at long ranges. However, it does have one glaringly significant shortcoming, and that is its lack of stealth.

Because it does not have a stealthy profile, the Su-35 would be at a distinct disadvantage against a fifth-generation fighter. Still, some studies have suggested that the Su-35 might be able to even the playing field thanks to its powerful engines, which significantly expand the fighter’s engagement ranges.

The Su-35 is admittedly not a stealthy fighter jet. It is, however, one of the most capable 4+ generation fighters currently in existence today. Moreover, thanks to its impressive engines, the Russian fighter could partially compensate for its lack of stealth with an expanded combat radius and high-speed supercruise.