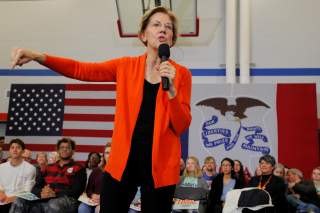 We already know that Elizabeth Warren’s massive student loan forgiveness proposal is atrocious policy that would saddle taxpayers with at least $640 billion in debt that millions of students freely accepted to greatly increase their lifetime earnings. That’s private profit, socialized cost. Now Warren is declaring that she’ll combine bad policy with even more dangerous government, promising to start forgiving student debt “on day one” of her presidency, as she declares in the tweet below. She offers a justification we’ve seen before: Congress isn’t moving fast enough. She does not, however, cite where the Constitution says Congress shall have the power to make law, unless the president decides it is taking too long.

We have a student loan crisis—and we can't afford to wait for Congress to act. I’ve already proposed a student loan debt cancellation plan, and on day one of my presidency, I’ll use existing laws to start providing that debt cancellation immediately. https://elizabethwarren.com/plans/student-loan-debt-day-one?source=soc-WB-ew-tw-rollout-20200114 …

Student loan debt is holding back our economy and crushing millions of families. We can't afford to wait for Congress - we need to address student debt on day one.

To be fair, Warren says that there is authority in law for massive loan forgiveness, and it is true that Congress has too often given away its power. But that there is legal authority for what Warren suggests she'll do defies the obvious reading of applicable law, which not only contains no “cancel it all” provisions, but has many targeted forgiveness and cancellation programs, including for debt held by teachers and people in “public service.” If the president is legally allowed to cancel student loans in basically any way he or she sees fit, why bother with targeted programs with specific rules?

This article by Neal McCluskey first appeared at the Cato Institute.