Here's Why China Is Flying Deadly Bombers All Over the Pacific 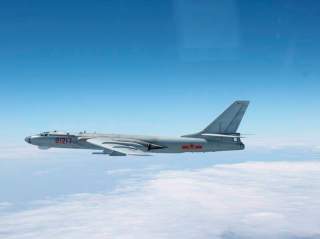 If the United States and Russia can conduct bomber flights to assert their status as great powers, doesn't China have a right to do the same?

That belief is one reason that China has begun aggressively conducting long-range bomber flights over the Pacific, according to a new report by the RAND Corporation think tank.

"They think of it as just something that a great power does," Derek Grossman, a RAND researcher who co-authored the report, told The National Interest.

Once viewed as a minor danger, China's bombers have begun to worry Beijing's neighbors and rivals, including the United States. Since 2015, Chinese H-6K bombers have flown at least thirty-eight long-distance missions over the Pacific, raising fears of devastating attacks on the bases and ships of the U.S., Japan, Taiwan and other nations.

The bombers flights actually accomplish four objectives, according to RAND.

First, bombers enable Beijing to send a deterrence message or to signal resolve in the conventional military domain to defend its maritime territorial claims, whether in the East China Sea against Japan, where Beijing claims the Diaoyu/Senkaku Islands, or in the South China Sea, where its claims conflict with those of a number of rivals, including the Philippines and Vietnam, RAND says.

"Second, over water bomber flights significantly enhance realistic training for PLAAF operators—for example, by allowing them to operate in areas they might use to launch cruise missile attacks against U.S. regional bases in a conflict scenario."

In addition, bomber flights make China's leaders look good in the eyes of a Chinese public that has been assured that China is building a world-class military. And, bombers are a way to pressure Taiwan, regarded by China as a breakaway province. China's air force has aggressively used social media to spread news of the flights to domestic and international audiences.

RAND also suggests another reason for the flights: the self-esteem of the People's Liberation Army Air Force. "Once viewed as a backward force equipped with antiquated aircraft flown by poorly trained pilots, the PLAAF has gradually stepped out of the shadow of China’s ground forces and emerged as one of the world’s premier air forces. In its path to modernization, it aspires to become what PLAAF officers and other Chinese military thinkers refer to as a 'strategic air force.' And, long-range flights capable of striking distant enemy bases are seen as one way of being 'strategic.'

Nathan Beauchamp-Mustafaga, a RAND researcher who co-wrote the report, thinks interservice rivalry is a secondary motivation. Nonetheless, "the secondary benefit of the flights for the PLAAF is that it does give them a stake in the maritime domain when the PLAN [People's Liberation Army Navy] is increasingly positioning itself as the leading edge of Chinese power projection," he told The National Interest. "Deploying a nuclear-capable bomber in the future would also likely help the PLAAF’s bureaucratic standing."

Ironically, China may have learned about long-distance bomber flights from the United States and Russia. During the Cold War and after, Russian bombers flew near—and sometimes crossed into—the airspace of the United States, Britain, Japan and other nations as a means to demonstrate Moscow's reach. This year, two Tu-95 bombers were intercepted off Alaska.

But the United States can hardly point a finger. At the height of the Cold War, nuclear-armed B-52 bombers were continuously airborne near the Soviet border, ready to attack upon command. In 2018, B-52s began flying Continuous Bomber Presence missions over the Pacific. The flights are "in accordance with international law and are vital to the principles that are the foundation of the rules-based global operating system," according to the U.S. Air Force. Similarly, the U.S. Navy conducts Freedom of Navigation Operations (FONOPS) in which it deliberately sails its ships in disputed waters—notably the South China Sea—as an assertion that the United States doesn't recognize China's territorial claims.

RAND believes China has been preparing for these bomber flights for years, with the missions increasing in complexity over time. But what's coming next may be far more ominous. While the H-6K is a Chinese knockoff of the 1950s Soviet Tu-16 bomber, China is developing the H-20, a modern bomber that is expected to have a range of more than 5,000 miles, which could put Hawaii within range of air attack. Meanwhile, the PLAAF is reportedly developing a variant of the H-6K that can be refueled in mid-air, which could also reach deep across the Pacific.

If the United States were to stop its Pacific B-52 flights and FONOPS cruises, would China stop its bomber missions? Not likely, says Grossman. China needs to train its bomber crews in long-range flights, which suggests the flights will continue.