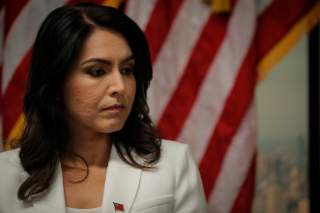 Democratic Hawaii Rep. Tulsi Gabbard announced Monday that she won’t participate in the December debate, even if she were to qualify for it.

Gabbard tweeted Monday evening that she will be meeting with voters in New Hampshire and South Carolina instead of going to the debate. She has previously considered boycotting past debates.

For a number of reasons, I have decided not to attend the December 19th “debate” — regardless of whether or not there are qualifying polls. I instead choose to spend that precious time directly meeting with and hearing from the people of New Hampshire and South Carolina.

The Hawaii representative hasn’t qualified for December’s debate. She needs one more poll giving her 4% or more support to do so. Regardless, Gabbard said she won’t be at the debate, which is co-hosted by PBS NewsHour and Politico.

Gabbard has made all of the Democratic debates except the one in September. She threatened to boycott the October debate, accusing the media and Democratic National Committee of “rigging” the race. Gabbard ended up attending that debate.

The deadline for qualifying for the Dec. 19 debate is Thursday. It is the last debate of the year, and candidates have to have 4% or more in at least four polls plus garnering at least 200,000 unique donors. Democratic candidates can also qualify by getting 6% in two single-state polls in the early voting states.