Here's Why North Korea's New Missile Submarine Is No Joke 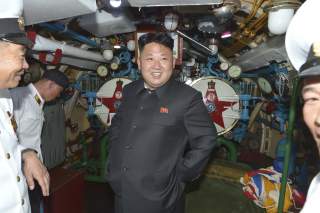 The Democratic People’s Republic of Korea appears to be continuing on its path to developing a new diesel-electric ballistic missile submarine (SSB) despite the recent summit between President Donald Trump and North Korean dictator Kim Jong Un.

South Korean lawmaker Kim Hack-yong made the claim citing intelligence reports provided last week by South Korean defense officials, the Wall Street Journal reports. According to the paper, satellite imagery reviewed by South Korean intelligence officials show that North Korea is moving men and material to the port of Sinpo where the submarine is believed to be under construction.

Despite the new development, some South Korean experts believe it is too early to give up on the Trump-Kim deal.

“It’s too early to say if the North Koreans have defaulted on the Singapore agreement to denuclearize,” Yang Uk, chief defense analyst at Korea Defense and Security Forum, told the Wall Street Journal.

The North Korean SSB and its submarine launched ballistic missile (SLBM) are not new developments—arms control experts have been tracking Pyongyang’s developments for years.

Late last year, satellite images analyzed by 38 North seem to indicate that construction of such a new SSB was well underway at the Sinpo South Shipyard. Photos showed what appear to be sections of a pressure hull for what could be the Sinpo-C diesel-electric ballistic missile submarine.

“Imagery from November 5 shows two larger circular objects that may be sections of a submarine’s pressure hull,” the 38 North analyses stated.

As Ankit Panda at The Diplomat reported at the time, the Sinpo-C could have a submerged displacement greater than 2,000 tons and will likely be the largest vessel ever to be built for the Korean People’s Navy since the Najin-class frigates.

It is likely that both the Sinpo-B (Gorae-class) and the Sinpo-C are derived from the elderly Russia submarine’s technology—which ultimately derives from the World War Two-era German Type XXI submarine.

“The continued presence of this object suggests ongoing SLBM ejection tests. If correct, this is likely a continuation of the ejection test campaign reported during July of this year,” the 38 North analyses reads.

“Regardless, additional ejection tests should be expected in the future for further development of the Pukguksong-1, a potential Pukguksong-3, or other future SLBMs. Such a test would also be valuable for validating missile launch systems for a new class of SSBs.”

While the new Sinpo-C SSB and its missile are not exactly state of the art compared to the United States or Russian nuclear-powered ballistic missile submarines like the Ohio-class or the Borei, the addition of nuclear-armed submarines would increase the overall survivability of the North Korean nuclear arsenal once the vessels are fielded in sufficient numbers.

South Korean and American forces would have to assign additional submarines to find and track the North Korean boomers. Essentially, the vessels complicate the targeting problem for the U.S. and its allies.