Hickenlooper to Press: ‘You Guys Should Be Protecting Me’ 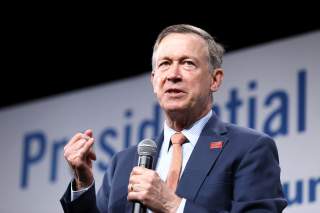 Former Colorado Gov. John Hickenlooper is demanding journalists defend him from charges that he violated state ethics rules during a trip he made in 2018 to a secretive meeting political elites attended.

Colorado’s Independent Ethics Commission released a report on Nov. 7 on ethics complaints lodged against Hickenlooper that suggest the former governor improperly received air travel and limousine service during trips he made in 2018. The Colorado Democrat told reporters they should be defending him.

“You guys should be protecting me on stuff like this. What’s the confusion?” Hickenlooper rhetorically asked “Next” on 9NEWS Monday. “I saved the state money.” One of his trips was to Italy to attend a Bilderberg Meeting, a secretive annual meeting where political functionaries and elites congregate.

Frank McNulty, a Republican, is responsible for leveling the complaints.

McNulty’s complaint alleges Hickenlooper, who is running against Republican Colorado Sen. Cory Gardner in 2020, violated Colorado’s gift ban when he took the trips because he received air travel and chauffeured limo service during the trips.

Hickenlooper considered the Bilderberg trip to be a vacation and paid his own way, according to the ethics report. Hickenlooper has maintained his innocence, telling 9NEWS that he’d be surprised if the ethics commission determined he acted unethically.

Still, the report examined other trips Hickenlooper made. He flew to Connecticut on a trip financed by MDC Holdings, a company owned by Hickenlooper donor Larry Mizel. Hickenlooper told investigators that the company refused his request to pay for the flight, the report claims.

The report also scrutinized a complaint that Hickenlooper officiated the wedding of SpaceX CEO Elon Musk’s brother in Texas.

Hickenlooper dropped his presidential bid in August after failing to gain traction in the polls. Hickenlooper’s Senate run would likely give Democrats a strong boost in their efforts to pick up the seat. He’s performing well in the polls against Gardner.