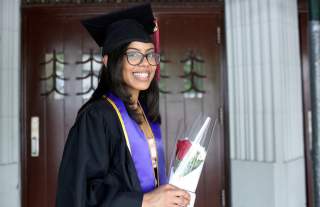 People with a master’s degree or doctorate can bank on a much higher starting salary than those with the same major but only a bachelor’s degree. That’s according to a recent survey of employers by the National Association of Colleges and Employers.

We reached the same conclusion about the payoff for advanced degrees in a study we recently published in Sociology of Education, an academic journal.

However, as sociologists who study inequality and disadvantage in education, we also know that the picture becomes more complicated when you see how different kinds of students pay for school.

Starting salaries are even higher for those graduating with a doctoral degree. For example, the average American with a Ph.D. in engineering, math or science could expect to make slightly over $100,000 a year once they complete their degree, while those leaving college with bachelor’s degrees in the same fields could expect to start out making between $62,500 and $70,000 a year.

We call this gap an “advanced degree wage premium.” It’s the increased amount of money that college graduates who go on to earn master’s, doctoral and professional degrees in law, medicine and other fields can expect to make over those with just a bachelor’s degree.

We find that Americans who continue their studies after earning their college degrees tend to borrow more for their undergraduate education than those who do not.

We have determined that the typical college student who needs to borrow money for their undergraduate studies and ends their formal education after college takes out roughly $13,500 in loans. With a constant 6% interest rate, it would cost $500 a month for two and a half years to pay off that amount of debt.

Borrowers who get graduate degrees typically borrow roughly $25,000 as undergraduates. Some then accumulate even more student loan debt on top of that. A student pursuing an advanced degree typically takes out another $35,000 after completing undergraduate studies. With a $500-per-month payment plan and a constant 6% interest rate, someone taking out $25,000 would take nearly five years to pay off their debt while a graduate student taking out $70,000 would take 20 years to fully repay.

Amounts of debt vary by degree program. For example, the 51% of MBAs who borrowed for their education and finished business school in 2016 owed an average of $66,300. Grads who earned a doctorate in science or engineering, psychology, business or public administration, fine arts or theology and borrowed to pay for their education owed about twice as much – $132,000. Given a $1,000 monthly payment with a constant 6% interest rate compounded monthly, it would take roughly six years to pay off the principal and interest on the typical MBA amount versus 18 years to pay off the principal and interest of a typical doctorate degree.

These debt burdens are not borne equally by all.

And African Americans see a 65% increase in their salaries above their peers who have only a bachelor’s degree if they earn a Ph.D. or similar degree. Those salary jumps are 12 and 10 percentage points higher than their white counterparts, respectively.

Americans currently owe more than $1.7 trillion in student loan debt. Yes, getting an MBA, a law degree or similar credentials usually increases earnings for years. But there are also economic, social and psychological costs associated with wracking up all the student loan debt it takes to get there. For example, those costs could include deferring investments in retirement, starting a family or buying a house and the anxiety that may come with making difficult decisions about finances.

We are in no position to tell individual borrowers whether advanced degrees are worth the cost. However, we emphasize that borrowers cannot focus just on earnings or just on cost to make informed decisions. Instead, students and policymakers should focus both how much a person borrows for an advanced degree – as well as how much they can expect to earn – to consider whether that degree will pay for itself down the line.