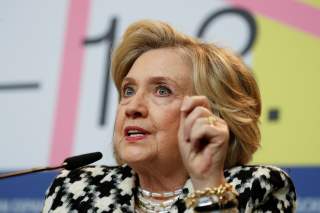 A federal judge on Monday ordered Hillary Clinton to appear for a deposition as part of a lawsuit filed by the watchdog group Judicial Watch, saying in a ruling that the former secretary of state’s written responses so far in the case have “left many more questions than answers” about her decision to use a private email system while in office.

Lamberth first ordered discovery in the lawsuit in December 2018 to determine whether Clinton used a private email system at Foggy Bottom in order to skirt the Freedom of Information Act (FOIA).

The FBI ultimately decided not to recommend that Clinton be charged for mishandling classified information, though former FBI Director James Comey said at a July 5, 2016 press conference that Clinton’s handling of her emails was “extremely careless.”

Clinton has provided written responses to Judicial Watch as part of the lawsuit, but Lamberth said that her answers leave many remaining questions about her decision to use an email server, and what she knew about State Department policies regarding FOIA.

“Judicial Watch correctly points out that many questions regarding her understanding of these obligations still remain unanswered,” Lamberth said.

Several reporters filed FOIA requests for Clinton’s State Department emails while she was in office, only to be told that the agency did not have any responsive records.

Clinton did not provide her State Department emails to the agency until late 2014, in response to congressional requests as part of an investigation into the Sept. 11, 2012 terrorist attacks in Benghazi, Libya.

Clinton handed over only around half of the 60,000 emails that were stored on her server. She claimed that the others were private in nature and did not involve State Department business.

Clinton has defended using a private email network, saying that she did it for convenience, and not to evade FOIA. But Lamberth said in his decision that Clinton has yet to fully explain her decision to use the email server.

He said that after reviewing Clinton’s responses in the lawsuit he is handling, as well as a lawsuit in front of Judge Emmet Sullivan, “the Court believes those responses were either incomplete, unhelpful, or cursory at best.”

“Simply put, her responses left many more questions than answers.”

“Judicial Watch uncovered the Clinton email scandal and we’re pleased that the court authorized us to depose Mrs. Clinton directly on her email conduct and how it impacted the people’s ‘right to know’ under FOIA,” he said.