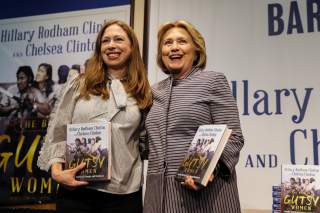 Trump tweeted Tuesday that “Crooked Hillary Clinton” should join the race “to try and steal it away from Uber Left Elizabeth Warren.” He added that she could only re-enter after explaining “her high crimes and misdemeanors,” including “how & why she deleted 33,000 Email AFTER getting ‘C’ Subpoena!”

Clinton responded to Trump’s invite on Twitter later in the day, writing “Don’t tempt me.”

Don’t tempt me. Do your job.

The House of Representatives opened up an official impeachment inquiry into Trump on Sept. 24, a move that the former secretary of state has come out in support of. Clinton said last month that Trump is an “illegitimate president.”

She added that she refuses to accept another four years with Trump in office as president.

“I don’t accept that or believe that [re-election] will happen,” Clinton said during an interview with “CBS Sunday Morning” Sept. 29. “I believe there were many funny things that happed in my election that will not happen again and I’m hoping that both the public and the press understand the way that Trump plays this game.”