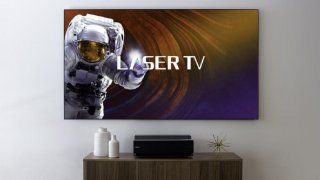 4K HDR TVs that boast 65- or 75-inch screens are pretty much the norm these days, and their respective prices have fallen to the point where any middle-class American can buy one. Now, let’s say you really want to impress your best buddy or neighbor -- would a 100- or 120-inch behemoth do the trick? You bet.

Regular flat-screen TVs that are that big are still pretty expensive, but if you really need that size, be sure to check out Hisense’s Laser TV. For those not familiar with this relatively new technology, it is basically a short-throw projector, situated only 8 inches away from the screen, that can offer outstanding 4K HDR picture. It features a unique and safety-tested Laser Light Projector Technology called X Fusion.

OK, at those price points, the Laser TV isn’t yet ready for the masses, but that future could come sooner than later. For one, it definitely won’t take you long to fully appreciate this TV- and movie-viewing experience.

With its vibrant and wide color gamut, enhanced spectrum and true-to-life details, you will wonder how you lived without this TV for so long. Both PlayStation and Sunday football games will indeed take on new life, as the MEMC technology will do the work to smooth out any fast-moving images on such a large screen.

In addition to the amazing picture quality, the Hisense Laser TV comes with Samsung’s Harman Kardon sound system and numerous built-in apps. It’s like a smart TV but some apps are noticeably missing, such as Sling TV (there’s good reason to believe that future versions will have more of today’s streaming giants).

The sound can get quite loud to give you that movie theater experience, and there is also a subwoofer that can produce that extra bass when you need it. Some have said the subwoofer can be at times too much, but you can be the judge on that. In short, it’s 100 watts of superior audio.

The coolest aspect of this particular Laser TV is that it utilizes an ambient light rejection screen, which means that you will always get bright and crisp images no matter what time of day or type of lighting. This technology rejects any light coming from the sides and above. As it only shows the light from the projector below, you will no longer have to close those curtains because of the annoying glare.