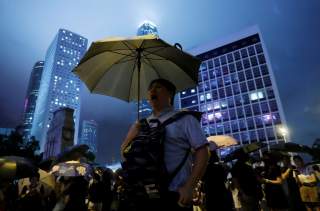 In the end, Beijing remains the ultimate backstop — one which will not tolerate a protest movement overwhelming the city and turning it completely against the People's Republic of China. That's why, even if all other pillars fall, Beijing retains the right the deploy the People's Liberation Army to instill order.

Not all protests are created equal. So far this year, popular uprisings in Sudan, Algeria and Puerto Rico have successfully overthrown their leaders — some of whom were authoritarian figures entrenched in power for decades. But perhaps some of the most geopolitically consequential protests of the year are still raging in Hong Kong, four months after they started over a controversial bill that would permit Hong Kong to extradite criminal suspects to mainland China. Protesters successfully blocked that legislation in June, but over the past six weeks, they have expanded their demands by agitating for the resignation of Hong Kong's leader, Carrie Lam, among other calls.

On the surface, the protests center on the extradition bill and the current government that sought to pass it. But the underlying issues are much more deeply seated in Hong Kong's status as a unique autonomous region of China, sensitivities among both Hong Kongers and Beijing about territorial integrity in the respective jurisdictions and, ultimately, the special jurisdiction's place within the People's Republic of China. Hong Kong's protests have not been nearly as violent as those in Sudan, where over 200 died in the uprising, nor as peaceful as those in Algeria, where police rarely engaged in violent clashes with protesters. They've also been much larger than those in Puerto Rico, where a few thousand protesters managed to force the governor from power with just a handful of rallies. The disparity in the nature of all of these protests and their outcome begs a more comprehensive analysis of the Hong Kong protests. Doing so might provide better clues as to the future of Hong Kong's demonstrations — even if there is one power looming over the city that will ultimately make the final determination.

Looking at the Pillars of Power

While protesters on the street make the most noise and garner the most attention, they alone do not compel a government to accept their demands given the constellation of other forces present in a society. In assessing the level of support (or opposition) to protesters' demands, it's necessary to consider all the stakeholders that determine a government's support — something that becomes possible when applying the "pillars of power" model that political science researcher Gene Sharp outlined in his theories on civil disobedience. Such stakeholders, or "pillars," include civil society, the education system, religion, the media, business leaders, bureaucracies, security forces and, ultimately, the government and its executive leaders. Looking at how each of these segments of society lean, as well as watching for indications that they are solidifying in favor of — or crumbling in opposition to — the government, provides a better barometer of where a protest movement like Hong Kong's is going.

Students are leading the more radical protest actions, including the July 1 assault on the Legislative Council complex, and have been engaged in some of the more violent clashes with police. Education administrators tried to condemn the students' more aggressive tactics, but the University of Hong Kong's (HKU) vice chancellor was forced to climb down from a statement criticizing students' actions after thousands of the institution's students, alumni and staff signed a petition, while hundreds more showed up in person outside his residence requesting he retract his criticisms.

The Civil Human Rights Front (CHRF), which has been leading some of the largest protests thus far, is an umbrella organization overseeing around 50 civil society and pro-democracy groups. The CHRF has been mobilizing Hong Kongers for pro-democracy rallies since the British handed the city over to China in 1997, but its most recent marches have attracted some of the largest turnouts the group has ever recorded. Estimates vary, but CHRF organizers claim that some of its marches have drawn over 2 million people — 27 percent of Hong Kong's 7.3 million population. And recent surveys indicate that some of the protesters' grievances are supported by other citizens: In May, an HKU survey found that just 27 percent of respondents were satisfied with Hong Kong's leadership, while nearly half were not. In late June, another survey determined that those proud to be a Chinese national had dropped from about 38 percent to 27 percent since 2018; in contrast, pride in being considered a "Hong Konger" remained high. When it comes to winning over the hearts and minds of Hong Kongers, Beijing is thus facing an uphill struggle.

Major Hong Kong news outlets like the South China Morning Press and the Hong Kong Free Press have remained nominally neutral, although reporting tends to favor the protesters' narrative that they are victims of police abuse. Few Hong Kong outlets have toed Beijing's official line that the demonstrations stem from external meddling and Western interference. These forces set the tone for the confrontation both locally in Hong Kong and for international audiences that have largely supported the protesters.

Because of Hong Kong's religious freedom and comparatively cosmopolitan makeup, the territory is home to a variety of faith communities, including Buddhists, Muslims, Hindus and Christians. So far, however, Hong Kong's Roman Catholic diocese is one of the only major religious groups to express official support for the protesters through its condemnation of the violent attacks on demonstrators in Yuen Long on July 21. At the same time, other Christian groups sang hymns in support of protests during protests in early June. Although Hong Kong enjoys more religious freedoms than the mainland, faith leaders must still walk a fine line between politics and spirituality. Ultimately, religious groups are likely to continue calling for peace and appealing to both sides to de-escalate tensions.

Hong Kong's business leaders opposed the extradition bill amendment in June, yet they have not backed the protests as fervently since the government abandoned the amendment. Anecdotal evidence suggests that some business leaders believed the violence at the Legislative Council on July 1 went too far, thereby jeopardizing stability in a city that has long been more of an economic than a political hub. Workers in the travel and health sectors have gone on strike and staged protests in opposition to the government, but Hong Kong's business elite are more tepid in their support. Nevertheless, the head of Hong Kong's stock exchange recently said China's People's Liberation Army should not become involved in Hong Kong and should leave the issue to local police to handle — a statement that didn't back the protesters but that conspicuously urged Beijing to remain on the sidelines. In the end, Hong Kong's business community is interested in maintaining stability, meaning it will be a crucial factor in determining how the protests play out. Its ultimate support will depend on which side it perceives as a bigger threat to stability: anti-government protesters or pro-government forces.

Perhaps most concerning for Hong Kong's government are the cracks emerging in Hong Kong's civil service. Upward of 1,000 state employees are planning a demonstration on Aug. 2 after the South China Morning Post reported that over 600 civil servants from 44 departments had filed a petition against the government's handling of the protests and its unwillingness to establish an independent commission to investigate police responses. Civil servants have threatened to escalate their protest action to work stoppages and strikes by mid-August if the government fails to address their concerns. These grievances not only demonstrate divisions within Hong Kong's government but also threaten to disrupt government services. And depending on the severity of disruptions to government services, such a development could compel a response from Beijing.

As Hong Kong's police have been at the front line in containing protests and protecting government property, they have borne the highest physical toll, with dozens of officers suffering injuries during the protests, including one whose finger was bitten off while trying to restrain a protester. Despite protest leaders' claims of police violence, the force has demonstrated a great deal of restraint and discipline. Police forces have been present for nearly all of the 27 separate demonstrations, which drew approximately 4.8 million people between March 31 and July 21. Dozens have been injured on both sides, some seriously, but no deaths directly linked to protests have occurred — a distinction that is unlikely to last long if the protests continue to escalate. Police have used nonlethal protest suppression tactics that are common throughout the world, firing tear gas and rubber bullets and leading baton charges in a few extreme scenarios.