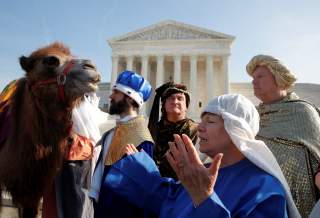 Around the Christmas season, it is common to see a display of the Nativity scene: a small manger with the baby Jesus and his family, shepherds, the three wise men believed to have visited Jesus after his birth and several barnyard animals.

One might ask, what are the origins of this tradition?

The earliest biblical descriptions, the Gospel of Matthew and the Gospel of Luke, written between A.D. 80 and 100, offer details of Jesus’ birth, including that he was born in Bethlehem during the reign of King Herod.

The Gospel of Luke says that when the shepherds went to Bethlehem, they “found Mary and Joseph, and the baby, who was lying in the manger.” Matthew tells the story of the three wise men, or Magi, who “fell down” in worship and offered gifts of gold, frankincense and myrrh.

But as my research on the relationship between the New Testament and the development of popular Christian traditions shows, the earliest biblical descriptions do not mention the presence of any animals. Animals first start to appear in religious texts around the seventh century.

A series of early Christian stories that informed popular religious devotion, including what’s known as the Infancy Gospel of Matthew, attempted to fill in the gap between Christ’s infancy and the beginning of his public ministry. This text was the first to mention the presence of animals at Jesus’ birth. It described how the “most blessed Mary went forth out of the cave and entering a stable, placed the child in the stall, and the ox and the ass adored Him.”

But the Nativity scene now recreated in town squares and churches worldwide was originally conceived by St. Francis of Assisi.

Much of what scholars know about Francis comes from “Life of St. Francis,” written by the 13th-century theologian and philosopher St. Bonaventure.

Francis was born into a merchant family in the Umbrian town of Assisi, in modern-day Italy, around 1181. But Francis rejected his family wealth early in his life and cast off his garments in the public square.

In 1209, he founded the mendicant order of the Franciscans, a religious group that dedicated themselves to works of charity. Today, Franciscans minister by serving the material and spiritual needs of the poor and socially marginalized.

According to Bonaventure, Francis in 1223 sought permission from Pope Honorious III to do something “for the kindling of devotion” to the birth of Christ. As part of his preparations, Francis “made ready a manger, and bade hay, together with an ox and an ass,” in the small Italian town of Greccio.

One witness, among the crowd that gathered for this event, reported that Francis included a carved doll which cried tears of joy and “seemed to be awakened from sleep when the blessed Father Francis embraced Him in both arms.”

This miracle of the crying doll moved all who were present, Bonaventure writes. But Francis made another miracle happen, too: The hay that the child lay in healed sick animals and protected people from disease.

The Nativity story continued to expand within Christian devotional culture well after Francis’ death. In 1291, Pope Nicholas IV, the first Franciscan pope, ordered that a permanent Nativity scene be erected at Santa Maria Maggiore, the largest church dedicated to the Virgin Mary in Rome.

This first living Nativity scene – which was famously depicted by Italian Renaissance painter Giotto di Bondone in the Arena Chapel of Padua, Italy – ushered in a new tradition of staging the birth of Christ.

In the tondo, a circular painting of the Adoration of the Magi by 15th-century painters Fra Angelico and Filippo Lippi, not only are there sheep, a donkey, a cow and an ox, there is even a colorful peacock that peers over the top of the manger to catch a glimpse of Jesus.

After the birth of Jesus, King Herod, feeling as though his power was threatened by Jesus, ordered the execution of all boys under two years old. Jesus, Mary and Joseph were forced to flee to Egypt.

In an acknowledgment that Jesus, Mary and Joseph were refugees themselves, in recent years, some churches have used their Nativity scenes as a form of political activism to comment on the need for immigrant justice. Specifically, these “protest nativities” have criticized President Donald Trump’s 2018 executive order on family separation at the U.S.-Mexico border.

For example, in 2018, a church in Dedham, Massachusetts, placed baby Jesus, representing immigrant children, in a cage. This year, at Claremont United Methodist Church in California, Mary, Joseph and the baby Jesus have all been placed in separate barbed-wire cages in their outdoor Nativity scene.

These displays, which call attention to the plight of immigrants and asylum seekers, bring the Christian tradition into the 21st century.