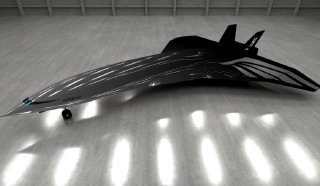 Hermeus, showed off a hypersonic aircraft prototype in a ceremony this week, Defense One reported.

The company is a startup backed by the Air Force and venture capital firms, and it fired the afterburning engine in the ceremony, which was held at the airport in Atlanta.

“Hypersonics needs a unifying vision,” Hermeus CEO A.J. Piplica said at the ceremony, as reported by Defense One. “That vision should be accelerating the global human transportation network.”

Those in attendance at the event were asked to wear headphones for ear protection.

The Quarterhorse prototype shown at the event is not meant to fly, but rather for “ground-based hardware development and integration,” Defense One said.

The company itself touted the launch on its blog.

“We brought together a diverse group of investors, industry leaders, military and government officials, researchers, and local civic associations—all the stakeholders who can make hypersonic flight a reality,” the company said.

“When an aerospace company typically unveils a new aircraft it’s nothing more than Styrofoam and fiberglass,” Skyler Shuford, Hermeus’ COO, said in the release. “But at Hermeus, we drive to integrated products. And we really, really like to make fire… We designed, manufactured, and integrated the aircraft, from nothing but an outer shape, in four months.”

In the video, the company’s executive vowed to “fly passengers across oceans and hypersonic speeds, before this decade is out.”

The company says on its website that its aircraft “have the potential to create an additional four trillion dollars of global economic growth per year, unlocking significant resources that can be utilized to solve the world’s great problems.”

Back in August, Hermeus had announced that it had reached a $60 million partnership with the U.S. Air Force for the testing of Quarterhorse.

“Quarterhorse will validate the company's proprietary turbine-based combined cycle (TBCC) engine, based around the GE J85 turbojet engine, and is the first in a line of autonomous high-speed aircraft,” the company said at the time. “By the end of the flight test campaign, Quarterhorse will be the fastest reusable aircraft in the world and the first of its kind to fly a TBCC engine.” The contract was presented under the AFWERX Strategic Funding Increase (STRATFI) program.

“Small business partnership is recognized by the U.S. Air Force as an important component to driving innovation. Reducing risk in high-speed transport technologies, as we are doing with this contract, provides near-term and long-term benefits to both the U.S. Air Force and the defense industrial base.”  Lt. Col. Joshua Burger, the Vector Initiative program manager, said, per the company’s announcement. “We are very excited to see Hermeus translate their demonstrated successes in engine prototyping into flight systems.”