History Made: Last Year, Israel's F-35 Were First Ever to a Launch Attack 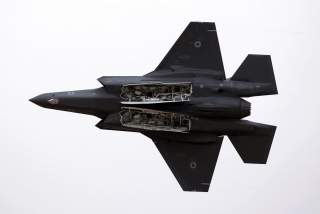 The F-35 stealth fighter has seen its first ever combat action, flying in an operation for the Israeli Air Force (IAF).

On May 22, 2018 in fact Maj Gen Amikam Norkin, IAF chief, told heads of 20 foreign air forces meeting in Israel at the International Air Force Commander Conference that “The ‘Adir’ (F-35I) aircraft are already operational and flying combat missions. In fact, we have performed the first operational F-35 strike in the world. We attacked twice in the Middle East using the F-35 (and) we are the first in the world to do so. The Israeli Air Force is a pioneer and a world leader in operating air power.” He did not specify the targets.

According BBC, Israel’s claim to have used it in an operational strike even before the Americans may be designed as a further show of military strength, since it is believed that elite Iranian forces are trying to entrench themselves in Syria to threaten Israel.

“Over the past weeks, we understood that Iran was transporting long-range missiles and rockets to Syria, among which are ‘Uragan’ missile launchers which we attacked, just north of Damascus,” Maj. Gen. Norkin added. “The Iranians fired 32 rockets towards Israel. We intercepted four of them, while the rest fell outside of Israel’s territory. Afterward, we attacked dozens of Iranian targets in Syria. Sadly, the Syrian air defense systems fired over 100 SAM (Surface-to-air missiles) at our aircraft using SA-5, SA-17, and SA-22 missile batteries. In response, we destroyed their SAM batteries. A short time later, we destroyed a 20-meter deep Hamas tunnel.”

Iran has hundreds of personnel in Syria, who it says serve as military advisers to the Syrian army. It has also sent thousands of volunteer fighters in support of the Syrian government.

The U.S. has given Israel more military aid than any other country in the world – currently around $4bn a year – and its laws on arms sales require that Israel always maintains military superiority in the Middle East.

This may not even be its first use by Israel. Its military is often quiet about its operations and there were reports that the stealth fighter had been used operationally as early as January last year.

Israel, the first country outside the U.S. to acquire the fifth-generation fighter, has received nine of the 50 F-35s it has so far ordered, and could take up to 75.

Noteworthy Israeli F-35 deals have been severely criticized because the aircraft are more expensive than those purchased by the U.S. Air Force (USAF) since they feature several unique (and indigenous) systems to satisfy IAF operational requirements.

However Minister of Defense Avigdor Lieberman explained last year that “The F-35 squadrons are the pinnacle of technology, and will assist the IDF and air force in meeting the many security challenges Israel faces head-on. They are a central aspect in protecting the safety of the people of Israel along the country’s borders and even away from them.”

All planes ordered by IAF (five of which have already been delivered) belong to the F-35A variant named F-35I Adir (Mighty) in Israel.

Nevertheless, as we have already explained, the service is taking a serious look at buying several samples of the F-35B STOVL variant to replace part of its fleet of legacy F-15s.