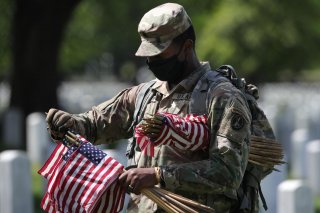 It is called the unofficial start to summer; a three-day weekend when a "tent pole" action film (usually with lots of CGI heroes) opens and it is a holiday that retailers use to clear inventory. Unfortunately, what is often forgotten is the actual origin of Memorial Day. For those who say that "Christmas is too commercialized" and that the meaning is lost should remember that, sadly, few Americans understand the meaning behind the Memorial Day holiday.

Too often people think it is a holiday to honor American military veterans, but that's not true. November 11, which began as Armistice Day to mark the end of the First World War and evolved into Veterans Day, is when we pay tribute to those who served in the United States military.

Memorial Day is actually a more solemn occasion—or at least should be—as it honors those men and women who died while serving in the Armed Forces. It is a time to reflect and remember those American patriots who made the ultimate sacrifice while protecting and defending the country they loved.

The holiday's origins go back to May 1868, when General John A. Logan, who was the commander-in-chief of the Union veterans' group the Grand Army of the Republic, issued a decree that May 30 should become a nationwide day of commemoration for the more than 620,000 soldiers killed in the recently ended Civil War. Logan reportedly chose that date for Decoration Day not because it marked a major battle, but rather because it was a rare day that didn't fall on the anniversary of a Civil War battle. Logan, who had been a congressman before the war, returned to his political career and eventually served in both the House and Senate. When he died his body was laid in state in the rotunda of the United States Capitol, making him just one of thirty-four people to have received the honor.

His Decoration Day was embraced by the nation and by 1890 every state adopted it as a holiday, and over the years it was used to remember those killed not just in the Civil War but in other American conflicts. However, it wasn't until 1971, during the Vietnam War, that Memorial Day became officially recognized as a national holiday.

Likewise, while it was largely known as Memorial Day, it was still officially Decoration Day until the Uniform Monday Holiday Act of 1968 finally went into effect. That both officially renamed the day, and moved it to a set day—the last Monday in May. Some veterans groups have expressed concerns that it has become merely a long weekend of summer and thus it fails to honor those veterans who made the ultimate sacrifice. For twenty years that cause was championed by Hawaiian Senator and decorated World War II veteran Daniel Inouye, who until his death in 2012, reintroduced legislation that would move the holiday back to May 30.

The National Movement of Remembrance resolution was passed in December 2000, and it asks that at 3pm local time, all Americans "voluntarily and informally observe in their own way a moment of remembrance and respect, pausing from what they are doing for a moment of silence or listening to 'Taps.'"

Memorial Day should be about honoring the true American heroes, not those in an action movie, and we should remember their sacrifice that makes it possible to enjoy a three weekend of BBQs and summer activities.